CPW, or Cost Per Wear

Once again I’m questioning the need for fashion magazines in my life.  Not the dozens and dozens of vintage magazines – their spot in my heart is quite secure.  I’m talking about today’s Vogue and Bazaar.  I realized just how unimportant they are to me when I sat down to read the current issues, and realized that the February and March issues were sitting there unread.

So I decided to devote an entire afternoon to catching up on my reading.  After an hour or two boredom got the better of my intentions.  But it was more than boredom – it was a feeling of just not connecting with what I was reading.  Both magazines were talking about making one’s fashion dollars stretch during tough economic times, but the idea that a $725 Louis Vuitton scarf is economizing escaped me.

That  example came from an article in Bazaar called “Cost Per Wear.”  Is that idea news?  I can’t remember a time when I haven’t considered the cost per wearing when considering a pricy purchase.  The article is illustrated with shots of celebrities wearing an item more than once.  If the article is to be believed, Katie Holmes’s $1500 Chloe bag is down to costing her $375 for each of the four times she’s been photographed carrying it.

I know that Vogue and Bazaar are not targeted to mainstream America, that it is assumed that the typical reader can afford $1500 handbags.  But the truth is that to most American women, a Coach bag is a splurge, if not a downright luxury.  A $1500 bag, unless bought secondhand, is not even a consideration.

And speaking of Coach, Marie at thevintagepeddler.com found this page on the Coach website, announcing a new line inspired by the work Bonnie Cashin did at Coach.  There is a lot there to love, but I can see my 13 year old bag being replaced by this: 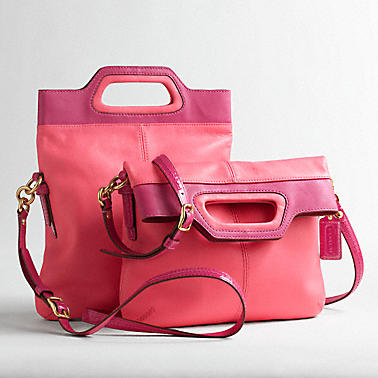