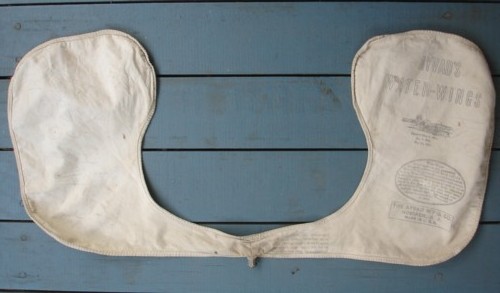 Need help staying afloat?  Well, you might try a pair of Ayvad’s Water-Wings.   These are patented 1902, but a quick web and patent search showed that the inventor, Hachig Ayvad manufactured these at least until the late 1920s.  In fact, a later version became much more literal, with the image of a bird being stenciled on each wing.
Hachig was also an inventor of hammers, and he improved on the mouth valve used for his water-wings.
This set is made from a finely woven cotton, but I can’t imagine that the air stayed in for very long as they are not rubberized.  So I imagine they instituted a few panicky moments when the wearer and non-swimmwer realized she/he was becoming deflated!