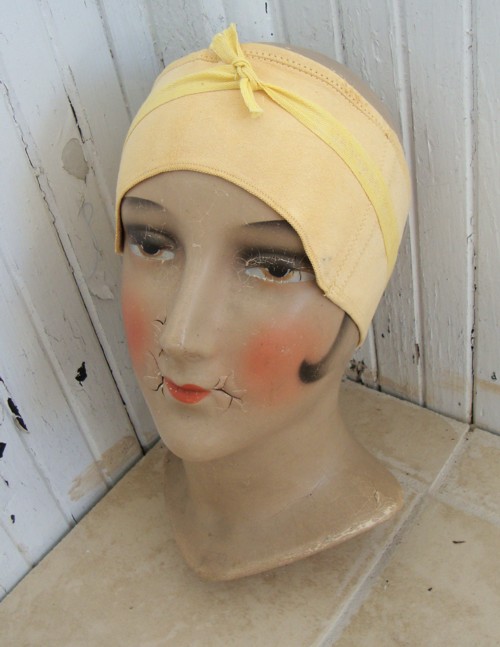 There was a time when women bathers – or swimmers – always covered their hair before going into the water.  That was probably due to practicality when women all had very long hair.  But during the late 1910s, women started cutting their locks, and so many began swimming hatless.

I suppose the bandeau was something of a compromise.  It kept the hair off the face, and somewhat covered.  But it was also a bit of a fashion statement.  The bandeau for sports was popularized in the 1920s by tennis great Suzanne Lenglen, whose very short pleated skirts and head bandeaus were widely copied.

This is the Mermaid Bathing Bandeau.  It’s made of chamois leather, and appears to have never actually been used. I got this last winter when I bought some very nice sports items from the family of a long-time collector of historic clothing.  She had some of the most unusual little things, like this bandeau, things that often have not survived due to use.   Being made of leather, I’m sure it would not have lasted long had the original owner been much of a swimmer! 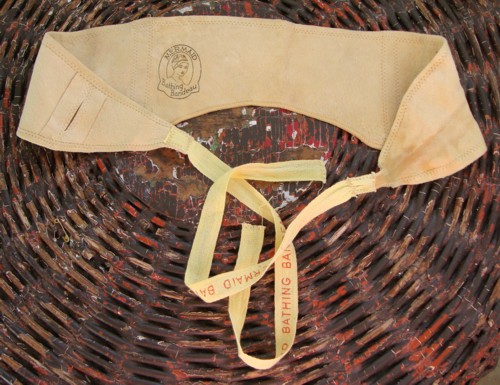 The woman in the middle is wearing a similar bandeau.