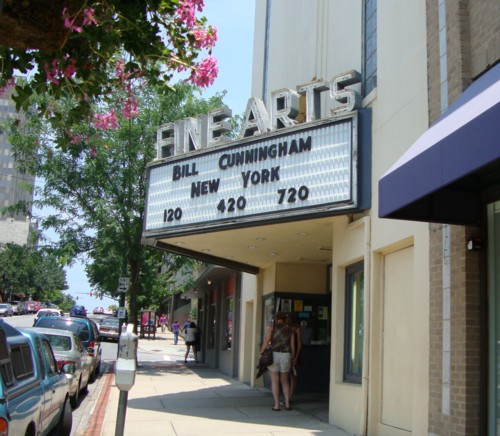 I finally got to see the documentary on photographer Bill Cunningham.  But first, a word about the theater…

Asheville is very lucky to have a small independent theater that shows  movies that the big mega-plexes would not touch.  Even better, the Fine Arts is downtown, and is located in a cute, slightly art decoish building.   The theater originally opened in the 1940s as the Strand, and was one of four downtown theaters.  From the time I can remember, it had been renamed the Fine Arts, and was strictly showing porn films, or as we called them, skin flicks.   All the other downtown cinemas closed or moved to the malls, but the Fine Arts remained downtown, as the area became increasingly seedy.

In the 1980s, with downtown Asheville as dead as that doornail,  obscenity laws finally shut the place down.  But in the 1990s, people began to see the potential in downtown, and in 1997 the Fine Arts reopened, this time showing small, independent films.  It’s a great addition to the area.

Bill Cunningham New York is just the type of film the Fine Arts shows.   It follows 80 year old street photographer Cunningham as he goes through his day, riding his bike through the streets of New York, looking for fabulously dressed people.  We watch him at work in the evening, covering affairs for the New York Times.  And then we get a look at the real work, the planning of the Times pages, deciding the layout and themes of each.   To see the process of how he works each page, echoing the themes running through each is simply enlightening.

This is in sharp contrast with Cunningham’s private life.  The photographer who is so fascinated with the clothes people wear, hangs his own very limited wardrobe on the handles of the file cabinets lining his small apartment.  His possessions seem to be limited to his files and his books.

But the really striking thing is how happy Cunningham is.  He talks all through the film about how dangerous money can be, that taking money limits one’s artistic freedom.   To him, being free to tell the story in his own way is the way to artistic fulfillment.

Or as he put it, “He who seeks beauty will find it.”

Hopefully, you have your own little art theater that will be showing Bill Cunningham New York.  It really is a don’t miss for fashion lovers, or for anyone who needs to see the result of a life lived without compromise to one’s beliefs. 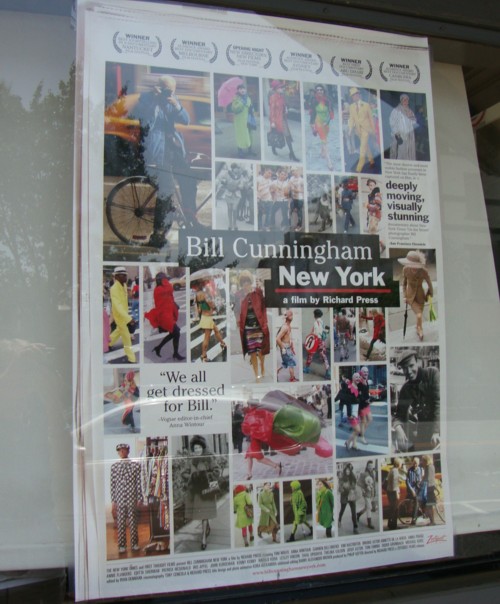