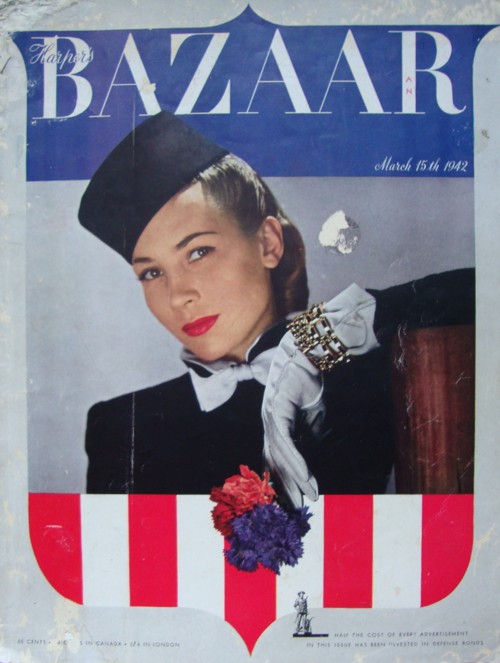 In honor of the Fourth of July, I’d like to take us all back to 1942.   World War II had just started for Americans, having been blind-sided by the Japanese  in December.  Red, White and Blue were the colors of the moment, as everyone was wrapping their minds around the fact that, yes, Americans were going to have to join this fight against Fascism.

This red, white and blue cover was probably already in the works even before the attack on Pearl Harbor.  Look in the lower right hand corner and you’ll see where the magazine was investing 50% of advertising revenue in Defense Bonds.  After December 7, 1941, the name of the bonds was changed to War Bonds.

By the time this Bazaar was published in March, the National Publishers Association (now the Magazine Publishers of America) were working on a plan to show their support for the war effort.  Paul MacNamara, a Hearst employee, came up with the idea for all US magazines to put an image of the American Flag on their July 1942 cover.  The covers were also to have the slogan, “United We Stand.”

In all, over 500 magazines participated.  The country’s newsstands must have been quite impressive!

Here’s a little taste of what was published that month.  These came from the Smithsonian website, where you can see more covers, and read more about this promotion.  There were prizes given for design, and two of the ones I’ve included won prizes, including the Grand Prize winner.  Can you guess which ones were picked?  (The answer is on the Smithsonian website, but make your guess before peeking!)