Some Thoughts on Cultural Appropriation

Last Sunday I linked to a photo essay at Slate on the Pendleton trade blanket, or as it would be more commonly referred to, the Indian blanket.  If you have not read the essay, you really do need to before reading my post.

Cultural appropriation has become a hot topic lately, not that is a new topic, as I remember discussing some of these issues in collage in the mid 1970s.  I  became interested in this several months ago when my blog stats showed a lot of traffic being driven to my posts on Pendleton.  I did a bit of searching myself, and found the blog that is linked to in slide 14 of the essay.  In this post, the writer expresses her concern about the use of Pendleton Indian blanket fabrics in clothes that are being marketed toward “hipsters.”

So what is cultural appropriation?  Simply put, it is when one culture adopts or uses specific things from another culture group.  It can be music, art, food, religion, celebrations or fashion.  That does not sound so bad, but the term cultural appropriation tends to have a negative connotation, with elements of racism and imperialism implied in the term.   Also implied is the fact that the appropriator does not understand the original meaning of the item being used.

So we have  one simple toy, being appropriated for fun and profit, with no thought of nor respect for the true significance of the object.  It’s easy to see why people to whom the headdress is a part of their religion would be upset.

But not all examples of cultural appropriation are so easy to grasp.  Part of the reason is that humans have always looked outside their own culture for something new.   There are plenty of examples going back to ancient times. 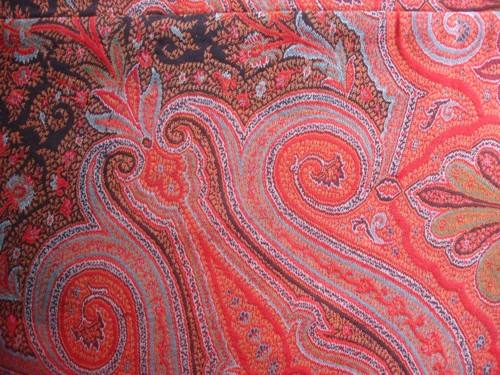 As for fashion, I’ll start with the paisley shawl, so important to the well-dressed Victorian woman.  The paisley design originated in South and Central Asia, where followers of Zoroastrianism consider it to sum up the essence of their religion.  In the 17th and 18th centuries, woven paisley patterned fabrics were taken to Europe by the East India Company.  Before long, European factories were making the print, which was called paisley due to so much of it being made in the Scottish town of Paisley.  Demand for paisley shawls continued through Victorian times, as the huge shawls were easy to wrap around the largest of hoop-skirted dresses.

Today, paisley is seen mainly on men’s neckties.  I have a very strong idea that no man who puts on his necktie has much of a clue that the print on it might have a deeper cultural meaning to the followers of  Zoroastrianism.   Even though the use of paisley has all the earmarks of cultural appropriation, is it somehow wrong for a Western man to wear it?

There are plenty of other examples.  In the 20th century, Western fashion and fabrics designers were heavily influenced by other cultures.   In the 1910s Paul Poiret made his reputation on his “Oriental” collections.  The 1920s brought a fascination with Egyptian-inspired fashion due to the opening of King Tut’s tomb.   Before and during World War II there was a craze for Germanic folk costume.  There was Tina Leser, and her famous 1947 honeymoon of inspiration, where she tapped into every culture imaginable.  And in the 1960s and 70s, if it was “exotic,” it was fashionable.

Frankly, I’m having a very hard time picturing fashion history without these influences.  And the bottom line is, take away all the cultural influences and you aren’t left with much.  I’m tempted to say we’d look like we were wearing the Maoist era Chinese uniform of grey, but that too is a cultural appropriation.

Pendleton Indian Blankets – for many generations a part of the daily life and ceremonials of the American Indian – have been adopted for their picturesque beauty and utility by all outdoor’s folk.

“Pendletons” are servicable companions for any outdoor adventure – no hardship being too severe for the strength of their weaving or the performance of their dyes.

You will see countless “Pendletons” on the beaches this Summer – a flash of bizarre coloring – an all-protecting robe.  You’ll meet them, too, when motoring, camping, canoeing, picnicing; on the verandas and in the homes.  They’ll be accompanying the young folks to college next Fall – to make their appearance on the sleeping porches – at the big football games – for all Winter sports.

As for Pendleton, the real appropriation took place years ago, when the blankets were first designed and marketed. As the Pendleton site says, the blankets were designed by the mill owners, using designs and colors they thought would appeal to Native consumers.  It doesn’t say that these blankets were also sold to White consumers as “Indian” blankets, but of course they were, as were similar blankets by other weavers like Beacon.

What seems to make the Pendleton blanket different from other appropriations is the fact that it has been embraced for many years by many Native communities. So I can see why some Native cultures would have these feelings of ownership.  It is an important part of their culture.

Pendleton using these “Indian” designs on clothing is really not a new development, as they have been doing this at least since the 1970s.  It’s just that now Pendleton has found a way to capitalize on the growing “heritage” trend in clothing styles.  Not Native heritage, mind you, but classic American brands heritage.  Having collaborations with Vans, Levis and Opening Ceremony is a way to get Pendleton woolens before a wider, younger, audience.  And not just the “Indian” patterns, but the plaids as well.

When you look at the economic pressures a company like Pendleton faces, just to continue manufacturing in the USA, you can see why they are taking this route. For them, it may make the difference between surviving or not.  In fact, as recently as July 2009, the company announced employee lay-offs and wage cuts.  I can hardy blame them for looking into their own history to find products and designs that appeal to the consumers of today.

I do find certain “trends” to be offensive, and others to be silly.  Why would any (non-native) adult think it is cool to wear a feathered headdress?

or a stuffed animal on their heads

Though I’m of the mind that “spirit hoods” are more Luna Lovegood of Harry Potter in origin, than any Native culture.

The way I see it, it would be virtually impossible to erase all the cultural influences in fashion.   My new Bass loafers, a descendant of the moccasin, is  good example of how we often do not realize the influence is even there.  But before you don the next New Agey/Native/Spititual influenced fashion, do a little research and make sure you are not sending the message that you are a cultural nincompoop.

A little personal aside:   My father’s family is Cherokee.  He was not reared in the culture, as they lived outside the Boundary in a White community.  They are listed on the Baker Role of 1924, an official listing of the members of the Eastern Band of the Cherokee.  My father was not born until 1927, and he was never enrolled in the tribe, but his two remaining siblings are today Cherokee elders.

I claim no special understanding of how Native people feel about this issue.  I can tell you from another aspect of my life that cultural stereotypes and appropriations are hurtful.  Being from the mountains of Southern Appalachia, I find the cultural stereotype of the “hillbilly” to be highly offensive.   Yet the word is tossed around in the US as if it were harmless, without thinking that behind the stereotype are real people, few of which are toothless, barefoot and illiterate.  Please excuse me, as I’ve got to go out and run off the next batch of moonshine!

And could someone explain to me, exactly what is a hipster?

29 responses to “Some Thoughts on Cultural Appropriation”