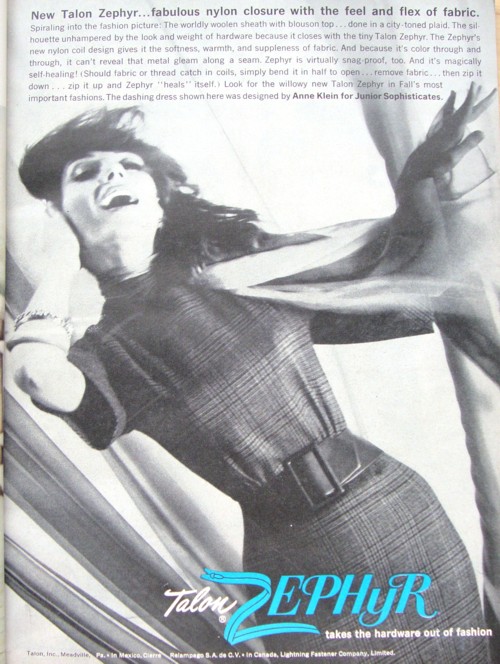 This September 1960 ad for Talon nylon zippers is the earliest one I’ve got in my collection.  One of the long-standing debates in clothing history is when was the nylon coil zipper introduced.  There are dozens of zipper histories on the web, but most don’t even mention the nylon zipper.  I’ve read statements from people who claimed they used nylon zippers in the late 1950s, and I’ve also read claims that nylon zippers were not available until the mid 60s.

Our ad clearly shows that nylon zippers were in use by manufacturers in 1960, and the ad says they are “new,” so one can assume that they were not used much earlier than that date.  Also, this ad was to introduce clothing buyers to the new zipper, and to reassure them that the zipper was “safe” to use.

I’m not sure if the new zippers became available to home sewers at this time, but my feeling is that it was not until a bit later.  When I took my first formal sewing class in 1967, our sewing teacher advised us not to use a nylon zipper as they were not as reliable as the metal ones.  So even by that late date, the nylon zipper had not been completely accepted.

And that is what makes using the zipper type a bit tricky when it comes to dating a garment.  Throughout the 60s garments were being made using either.  Even in the 1970s many home sewers were using metal zippers.

If anyone has any concrete evidence – an ad, or an article in print – that pre-dates September 1960s, please post about it.  And I’d love to have a copy for my files.  Also, anyone with early 1960s home sewing magazines, I love to hear about what they show about the use of nylon zippers.