Today, another find from the last Charlotte Metrolina show.  This is one of those things that you have no idea it exists, but the minute you spot it, you know it is exactly what you have been searching for.

It’s an album, covered in vinyl print, with plastic sleeves on the interior.  The seller said that an LP record album fits in the sleeves perfectly, so that was probably the intended purpose.  Today, it would make a nifty photo album or scrapbook for a European trip.

I’m pretty sure this album was made by the same company that made two other items I have in a similar, but seemingly a bit earlier, print.  A small photo book that I have in that print has a small sticker that reads KEK.  I’ve never been able to find out that the letters stand for.  I do believe the company was (is?) located in Europe, as the small photo book came from France, all the writing is in French or German, and for mass produced items, they sure are scarce here in the States. 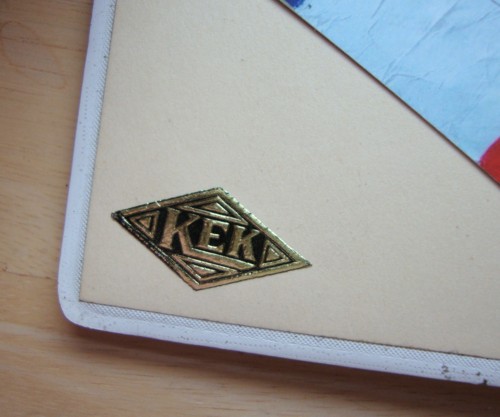 And now for the close-ups:

If anyone happens to spot other pieces of either print, I would love to know about them, even if they are not for sale (but especially if they are!)