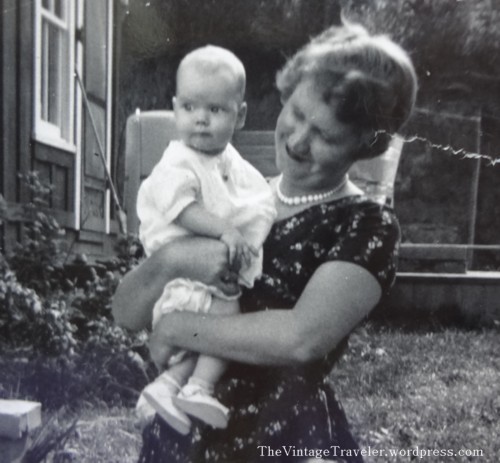 I’m wishing all the mothers a lovely day.  That’s my mother, holding me.  Isn’t her dress beautiful?

And now for the news…

*   Take a fun video tour of the Pendleton Woolen Mills.

*    Here’s an optimistic video about the textile industry in North Carolina.  This filmmaker focuses on the many success stories.

*   Hear the story of Eleanor Lambert and the beginnings of fashion week from  WNYC’s Sara Fishko.

*   Sadly,  Ottavio Missoni, the co-founder of  Missoni has died at 92.  Next week I’ll be writing about the influence the company had on 1970s fashion.

*    The Scottish cashmere industry is troubled, but the news this winter that Chanel had acquired Barrie, the maker of Chanel sweaters, was very welcome.  Here’s an interesting account of a visit to the factory.

*   As the death toll in the factory collapse in Bangladesh passes the 1000 mark, it appears that action is being taken on quite a few fronts.   Several major companies have joined in a sustainability drive headed by Otis College of Art + Design, retailers are thinking more about transparency in the line of clothing supply, and people are starting to relate this tragedy to several closer to home.  Unfortunately, there are still those who feel they have the right to cheap clothing.  I hope that more people are starting to examine their own clothing consumption, and are making changes to ensure human rights and safety for all workers.

*  Chanel has just released a short film about the beginnings of the House of Chanel.  Entitled Once Upon a Time…, it was directed by Karl Lagerfeld.  All I can say is, Karl, don’t quit the day job.

*   The Georgia Museum of Art in Athens, Georgia will be showing the fashion  collection of Ann Bonfoey Taylor.  The exhibition opens June 1, and closes September 14, 2013.   Proof that you do not have to go to New York or London to see fashion exhibitions.

*  Of course, one can’t deny that there are always several exhibitions of interest to fashion historians at any given time in New York City.  At present, the one getting all the attention is the Met’s Punk: Chaos to Couture.   Even before the opening of the show this past week, there was a growing controversy.  Malcolm McLaran’s widow has claimed that some of the few items from the 1970s are not authentic, and Vivienne Westwood feels she had been slighted when the Met did not take the retrospective that had been put on at the V&A.

But even at the press preview on Monday, curator Andrew Bolton was an apologist for the exhibition, explaining that the exhibition was not meant to be a history of punk fashion; it was a study of the influence punk has had on fashion since the mid 1970s.  For that reason there are no garments shown that were worn by Debbie Harry or Sid Vicious or Patti Smith, and the wigs are not the expected mohawks.  By some accounts, there are only seven actual punk garments in the exhibition.

That despite the fact that the Met’s own press release stated that “Original punk garments from the mid-1970s will be juxtaposed with recent, directional fashion to illustrate how haute couture and ready-to-wear have borrowed punk’s visual symbols…”

My interest in fashion exhibitions always leans toward the historical aspect.  I guess that is why for the life of me I can’t understand why the Met, with its glorious collection of historical fashion, continues to focus on what within the past ten years or so could be seen coming down the fashion runways, and could be examined in person at Bergdorf Goodman.  In fact, there are items in the show that are from at least one current collection, Burberry.

There was an excellent article in the New Yorker back in March, in which you get a good picture of the influence that Anna Wintour has over the decisions involving the exhibition.   Not the gala, the exhibition.  There is some part of me that hates that the person who is choosing the designs we see each month in Vogue, is also helping determine what we are seeing as fashion history and culture.

I’ll withhold any opinion on the exhibition itself until I see it in August, but the reviews are not very positive.  Suzy Menkes called it “Punk without the down and dirty” (except for the CBGB men’s room) and The Daily Beast speculated the the exhibition tends to show that the Costume Institute is just a “shill for the fashion industry.”

And while not a review of the exhibition, Robin Givhan’s piece, “Even if Punk Can’t Shock, Fashion Still Can,” is a very thoughtful examination of the shocking elements that exist within the fashion industry.