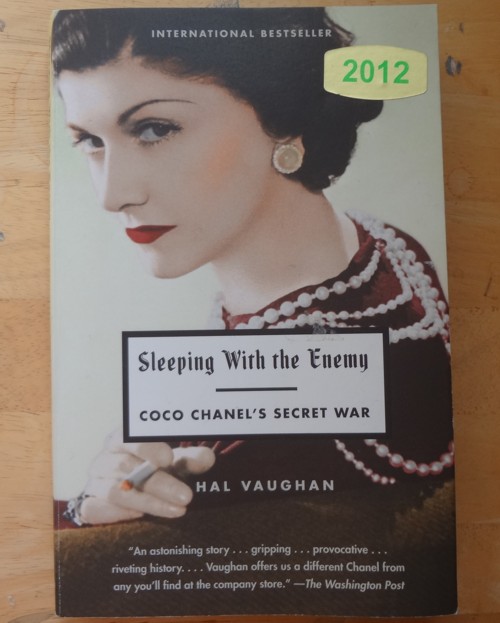 In preparation for making my “French Couture” jacket, I decided to reread my books about Coco Chanel, and I bought a few new ones as well.  One that I’d been meaning to read was Sleeping With the Enemy: Coco Chanel’s Secret War.

If you have read any of the hundreds of books about Chanel, then you know that she closed her couture house before the Nazi takeover of France, and that during World War II she lived in the Ritz Hotel and took a Nazi lover.  But for the most part the years between 1939 and 1954, when Chanel reopened her house, are just sort of skipped over in writings about her.

This book by Hal Vaughan attempts to fill in the blanks.  Vaughan spent years studying documents in England, France, Germany, Spain and Russia.  What emerged from his research is a pretty sorry tale.

Though the book is primarily concerned with the war years, Vaughan starts with Chanel’s birth in 1883, and follows her rise to fame.   He takes a close look at the influences of her life in an attempt to explain (but not justify) the actions she took during WWII.

Chanel was born to poor peasant parents.  When she was twelve her mother died and her father took her and her sisters to a convent to be reared by nuns.   According to Vaughan this is where Chanel first encountered anti-Semitism, as she was taught that it was the Jews who had killed Christ.   These beliefs were strengthened through several of her relationships, including those with her lovers the Duke of Westminster and artist Paul Iribe.

She was also quite bitter about an arrangement she made with Pierre and Paul Wertheimer in 1923.  The Wertheimers were Jews who were in the perfume business.  Chanel entered into a legal relationship where she pretty much signed over the rights to make Chanel *5 in return for 10% of the profits.  Even though the arrangement made her wealthy, after a while she began to feel that she had been cheated by the brothers.

In 1936 Europe was in turmoil.  The Nazis were gaining strength, the Spanish were at war, and in France the government seemed to be moving toward Communism.  Many labor unions organized strikes, closing down industry, services, and shops.   In June all of Chanel’s employees closed down her shop and atelier.  Chanel was infuriated, and to a large extent blamed the French Prime minister, Leon Blum, who was Jewish.  After a standoff that lasted several months, Chanel gave in to the worker’s demands.

In 1939, after Germany invaded Poland and France declared war on Germany, Chanel abruptly closed her business.  She declared that war was no time for fashion, but Vaughan proposes the idea that this was Chanel’s way of getting even with her workers who had gone on strike three years earlier.  The closing of a couture house might not seem like a big deal, but the closure meant that 3000 workers lost their jobs.

As the Germans occupied Paris in 1940, Chanel took another lover, Nazi agent Gunther von Dincklage.  Vaughan suggests that Chanel first became involved with Dincklage because her nephew, Andre Palasse had been captured by the Germans.  She needed help getting his release from a German camp.  In 1941 she made a deal to obtain Andre’s release.  It involved Chanel going to Spain as an agent for Germany in return for his release.

After the occupation Chanel also tried to get back control of her perfume business, claiming that the Jewish Wertheimers could not be the legal owners under German law.  But the brothers had foreseen Chanel’s move and had signed over the company to an “Aryan”business associate.  After the war they had to fight him to regain control and were successful.

Throughout the war Chanel continued to made trips on the behalf of the Third Reich.  She was even involved in an effort of some Nazi officers to get a message to Winston Churchill, hoping to save their skin as it became obvious that Hitler’s regime was doomed.  During the years that Chanel had been the lover of the Duke of Westminster, she had become great friends with Churchill.  These officers attempted to exploit this relationship.

After the Liberation, life became quite difficult for those who had collaborated with the enemy.  Thousands of French citizens, including Chanel, were arrested.  In Chanel’s case, she was interrogated and released, possibly with the help of her old friend, Churchill.  She quickly fled Paris, going to live in Switzerland.  For a while she looked to be in the clear, but in 1946, her involvement was again questioned.  This time she denied all the charges, even though there were documents that contradicted her testimony.

For some years Chanel lived with Dincklage in Switzerland, but by 1951 she was by herself and at loose ends.  In 1953 she decided the time was right for her to return to fashion.  Her comeback show was in February, 1954, and was met with a lukewarm reception in Paris, but it was acclaimed in the Unites States.   Her company was in deep financial trouble, and an unlikely savior appeared to save it.

Pierre Wertheimer offered to buy the business, the Chanel name, and her real estate.  In return all  of Chanel’s expenses would be paid by the company and she would retain control of the couture house.  At 71 years of age, it was too good a deal to pass up.  It was a money maker for them all.  Chanel spent the rest of her life in comfort, and the Wertheimers became fabulously wealthy.  The family still owns Chanel.

This is a greatly simplified account of Vaughan’s research.  The evidence against Chanel is pretty clear – she was not just sleeping with the enemy, she was the enemy.   While Vaughan gives a convincing case for Chanel’s guilt, the writing is at times disjointed and hard to follow.  There is a lot of skipping back and forth in time, and so it helps to have a good grasp of the larger events of the 1930s and 40s.

It might be easy to say that Chanel lived a charmed life, that she escaped justice and instead of punishment, spent her later years in luxury.  But the truth seems to be that she was one unhappy individual for most of her life.   Her lovers never stayed, but instead, married others.  Her last years were spent in what she feared most, being alone.