The Danger of Borrowing Clothes 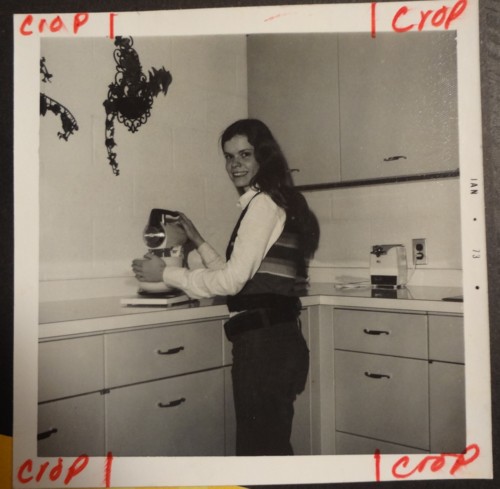 This is me, pretending to use a mixer in the home ec room of my high school.  The year is 1973, and I’ve just been awarded the title of Betty Crocker Homemaker of Tomorrow for my school.  At home it was a huge joke, because I was well known for my cooking failures.  My brothers called me Miss Betty Crocker.

I took home ec for three years in high school because half the year was spent on sewing.  Who could resist the opportunity to spend an hour of each school day actually sewing?  Not me.  And I somehow muddled through the cooking part, due mainly to the fact that I knew how to pick a good cooking partner.

Even though the award was given by a food company, there was no cooking ability involved in the process.  The winner was chosen purely on the basis of a multiple choice test that was given to all the seniors who were in home ec.  I may not have been able to cook, but I was a pretty good test-taker, and so I beat out all the girls who actually could cook, including my best friend who was the favored candidate (and teacher’s pet, it must be said).

I tried to be humble about the award probably because no one, teachers included, thought I deserved to win.  So I just forgot about it and tried to live down the teasing at home.

At the time I was seventeen and my sister Susan was ten.  We got new clothes for Christmas, and it didn’t take long for me to realize that my baby sister had not only caught up to me in size, but also that Santa had brought her some very cute things to wear.  I knew better than to ask if I could wear them, but she and my brother left for school about twenty minutes before I did.  So I decided to raid her closet, knowing that I’d also arrive home before her and would be able to change into my own clothes.

I got a disapproving look from my mother as I headed out the door, along with a stern warning that I was playing with fire.  I just laughed it off.  In the photo of me you can see the outfit.  The pants are purple corduroy bells, and the sweater vest was just adorable.  The back was multi-colored stripes, but the front had little folkloric figures knit into the design.  I loved it.

I don’t remember a thing about school that day except that a photographer from the local weekly newspaper came by the school to take photos of anything that might be news worthy.  That’s how I came to be pretending to mix up a cake, and how ultimately, I got caught.

I was so excited about having my picture in the paper that I forgot that I was wearing Susan’s new clothes.  When the paper came out with my article, my time in the sun was short-lived.  The only thing Susan saw was her vest and pants.   As all heck broke loose, my mother said that she had warned me, and that I was going to just have to live with it.  And Susan did eventually get over being mad, but she kept a much closer eye on her closet from then on.

You can thank my little brother for the story.  I’d forgotten all about this until he brought it up at dinner last weekend.  I think all he really remembered was the yelling and crying!

38 responses to “The Danger of Borrowing Clothes”