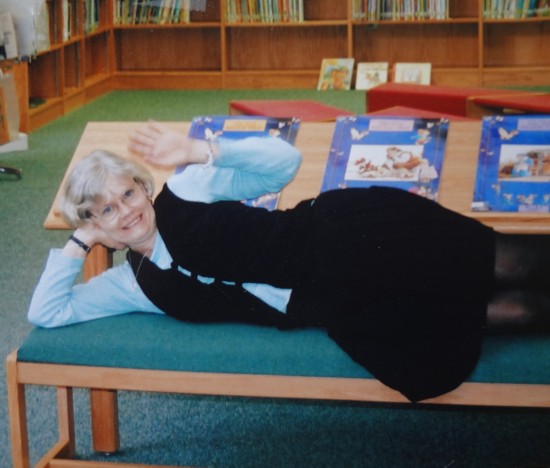 If you’ve read my “About” page, you know that I spent twenty-eight years in an elementary school classroom.  Recently I’ve been having dreams about teaching – dreams that are not necessarily pleasant.  The children are either unruly, or there are a hundred of them packed into a room designed for twenty-five.  Or I forgot to get dressed that morning and spend the day looking for something – anything – to cover myself.  It happens every late summer as soon as the “Back-to-School” banners start appearing in stores.

Scary dreams aside, I loved teaching, otherwise I’d never have spent twenty-eight years doing it. But when it came time to retire, I delightedly passed my plan book and 437 apple figurines on to the next teacher to occupy my classroom. The photo above was taken for the yearbook as my “retirement portrait.” I don’t think they used that one, though.

Even though I’ve been retired for nine years, people still ask if I miss teaching. My answer is generally, “No,” but there are times when I realize there is nothing like a good captive audience to make your thoughts and opinions seem important. I miss that, but then I do occasionally turn to this blog to do a bit of teaching, and preaching. And so today we are going to have a little writing lesson.

One of the biggest rules for writing is to write for your audience.  In the case of my fifth graders, I was most often their audience. I stressed to them that they had to write in a manner that allowed them to correctly communicate their thoughts to me, and in order to do so trendy slang was not permitted.  I felt like I was doing them a big favor in not allowing “words” like gnarly (1980s) or phat (1990s) to be used in their writing.  And it’s not just that those words sound dated today, it also helped some of them develop a habit that would help them if they had to do more formal writing in high school and college.

Today I’d be banning terms like cray-cray and amazeballs and dope and totes and fail (used as a noun).  I see these “words” on social media all the time, and I realize there is a need to look cool (one of the few trendy slang words that has endured, being popular in the 1940s)  but slang changes so quickly that one runs the danger of sounding dated.  Who could have been cooler in 1969 than Arlo Guthrie”

Believe me, by 1971 that just sounded weird.

Write for your audience. Remember that if you are writing on the internet, you have a multi-generational audience.  You also have an international one. Many struggle to read standard English, much less English that is sprinkled with slang that changes as soon as a celebrity uses a word in a cutsie way and everyone rushes to copy.

If you find that you are guilty of using these slang terms, don’t be offended.  As the teacher I’m here to help, not to criticize!  And, yes I do know that my own writing is not exactly textbook writing.  I’m writing to my audience, my vintage and fashion history friends, so I use a conversational voice. 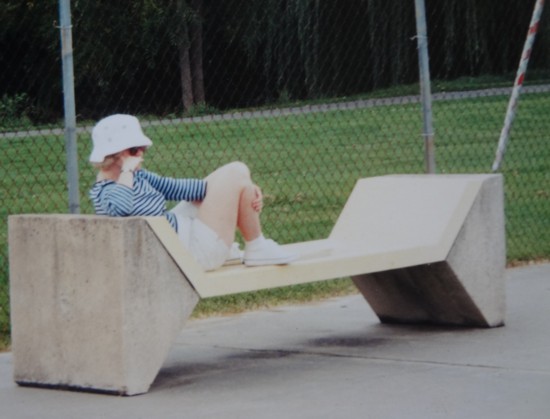 I wanted to end this with a photo of me in the classroom, but the best I could do was this shot that was taken while watching the class on water safety day.  This was taken in 2000, so I want to stress that I was the person who started the whole nautical stripe trend.  And yes, I do still have and wear that striped tee.

19 responses to “Back to School”