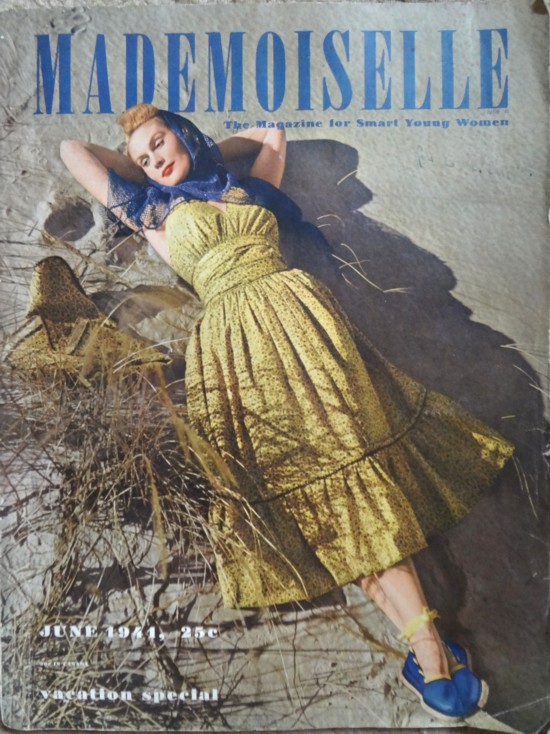 Even though this is the cover of a June issue, the photo reminds me more of this time of year.  The stores and magazines are now full of clothes for cold weather, but here in the South there will be at least another month of warm weather.  Women in the South (and the southern parts of the West) have long known to transition to autumn clothing slowly.  Put away the whites and the light pastels and rely on warm, golden colors in cottons.  Add a sweater on chilly mornings.  The coats won’t really come out of the closets until late November.

I finally had a chance to sit down and thumb through the massive Vogue September issue.  At 856 pages, this issue fell short of the 916 page record, but still it is heavy and bulky and full of things to buy.  It is another season of asking who in their right mind would wear a certain shoe, in this case a particularly ugly Dior model that looks like three different shoes were thrown into a blender and mishmashed together.

And while I didn’t sit and count the pages, it sure seems to me that most of the big fashion houses are really in the business of selling accessories.  For the most part, the shoes look ugly and difficult to wear, whereas handbags are generally sleeker and not as tricked out as in previous seasons.

But the only company whose ads really made me wish I had thousands to spend was Louis Vuitton.  The clothes have a nice uncluttered mod vibe, and there is a little handbag that is like a miniature Vuitton trunk.  There is also an article about the new designer at Louis Vuitton, Nicolas Ghesquiere.

Like I said, living in the South means that our clothes are lighter.  I have several coats, all vintage, none of which I wear more than a handful of times each season.  Maybe that is why I find the over-abundance of fur in Vogue so odd.  There were three editorial features on coats, and the majority of the ones shown were either made from fur or trimmed with it.  And many of the other features also had furs.  I don’t get the emphasis on a product that many women can’t wear because of their climate, and that many will not wear because they feel wearing fur is wrong.

I decided to add a photo of the ugly Dior shoes, taken from one of the many Dior ads in the Vogue September issue.  The pink part is actually molded rubber, like the sole of an athletic shoe, and the name “Dior” is embossed there near the heel.  Note also that the very tip of the black part is red, which extends under that cute little over-hang.  In some photos it looks like a tongue.  And finally, I do hope that heel is steel reinforced, as I can see that really narrow part snapping right off.