I know that looking up while visiting a big city labels one as a country bumpkin, but when looking for traces of the past, it pays to risk one’s sophisticated image.  The Lombardy Frocks building was located in the heart of New York City’s Garment District, on West 37th Street.  Lombardy was the maker of both Suzy Perette and Gigi Young dresses.  The sign is a reminder of the important activity that was taking place all over this area of Manhattan.

The garment-making industry in New York goes back to the 19th century, but the Garment District as we know it today was built primarily in the first three decades of the 20th century.  The area had been a poor residential area, but in the early years of the 20th century garment makers  began buying up the old apartments, tearing them down, and replacing them with high-rise factory buildings.

The building that came to house Lombardy Frocks in 1949 was originally the Noxall Waist & Dress Company.  You can see what is left of that sign below the Lombardy Dresses one.

It’s a bit hard to imagine this building housing workers at cutting tables and sewing machines, but the large windows that let in the natural light must have seemed very modern to workers, many of whom had worked in sweatshop conditions in older buildings downtown.

Lombardy Dresses and Suzy Perette were owned by the  Blauner family.  The “Perette Silhoutte” was based on the New Look of Christian Dior.  The Blauners would travel to Paris to buy the right to reproduce Dior models each season.

The Suzy Perette matchbook was a lucky find from my friend Tiffany of Pinkyagogo Vintage.  You can see the same logo that is on the sign, and if you look carefully and squint a bit, you can see the words the “perette” silhouette under the dress on the sign.

“the perette silhouette”… The shape that’s sweeping the country…Created with a revolutionary new method of construction, employing intricate gores and clever detailing which moulds your body into a flattering long torso line with a billowing skirt below. 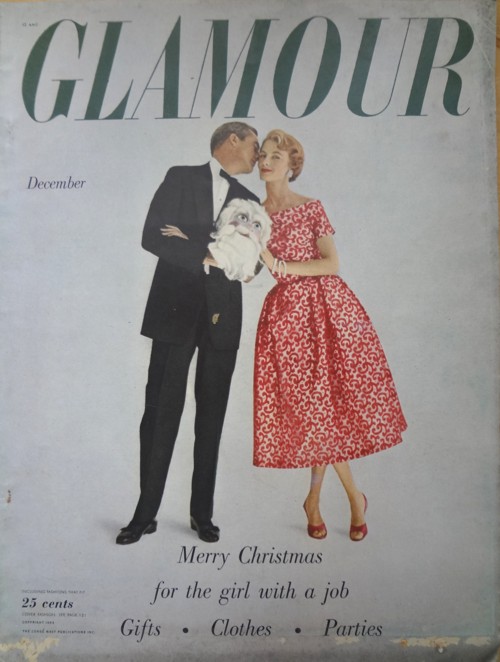 And here is an example of a Suzy Perette dress, on the cover of the December, 1953 issue of Glamour magazine.

Filed under Curiosities, Made in the USA