Currently Reading: A Fabric of Defeat 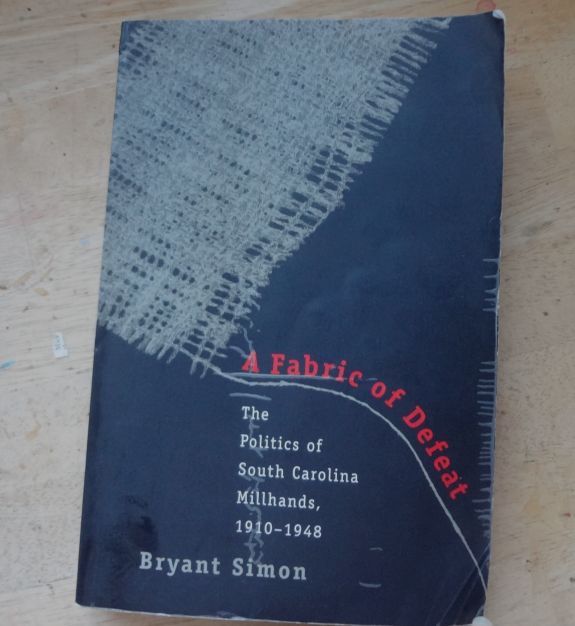 One of the things that makes fashion history so interesting to me is that there are hundreds of ways to approach it, and hundreds of subtopics to grab my attention.  Growing up in the South in a town that was dominated by its relationship with the local factory (paper, not textiles) and having relatives who worked in cotton mills from the 1930s through the 90s  has made me quite interested in the textile and garment industries of the Carolinas.

People often make the mistake of confusing the two states. The piedmont (the area between the coastal plain and the Appalachian Mountains) of both was textile country, but having different governing bodies meant that what applied in one state did not always apply to the other.  Being from North Carolina I am quite familiar with the labor movement here, and the struggles workers went through in order to have safe working conditions and a fair wage.  I knew about the deadly battles fought between unionizers and law enforcement in my state, but was ignorant of similar situations that happened just south of me.

I found A Fabric of Defeat: The Politics of South Carolina Millhands, 1910 – 1948 at my favorite Goodwill.  I’ve been reading it over the past month, interspersed with other, lighter reading.  It’s not that the reading is hard, but that it is difficult to digest.

There were quite a few truisms that I was exposed to in my days as a history student, and one of them was that it is rarely fair to judge the actions of people in the past by the mores of today.  Still, it is hard to come to grips with the way people were treated in factories, and also with the racism that kept Blacks out of the mills and in the worst kind of poverty.  It is especially true knowing that mill conditions have not really changed, they have just moved to Pakistan and Bangladesh.

There is no way I can summarize the story this book tells, as it is too complicated to go into the sort of detail that would lead to a real understanding of the situation.  But simply put, the situation in the mills was good through World War I because of the increased demand for textiles.  We tend to think of the 1920s as boom years, but for many Southern textile companies, this was not so.  The loss of army contracts combined with fashions that required much less fabric led to over-production, which led to the collapse of prices.  Many millhands lost their jobs even before the stock market crash of 1929.

The Great Depression just served to make the situation worse.  And in another of those great history truisms, it was not until the war machine cranked back up in the late 1930s that recovery came to the mills of South Carolina.  By that time the mill workers had tried, and failed, to influence the politics of South Carolina in a way that would better their lives.

There are no heroes in this story.  Most of the state’s leaders were not from the area where the mills were located, and saw no reason to pass laws to help the workers. The few politicians who did fight to improve the lives of the mill workers also worked to keep the vote from Black people.  The mill workers themselves refused to work in factories where Black people worked, thereby keeping their one claim of status – that they were at least better off than the Black man.

Several years ago I visited the South Carolina State Museum.  There were several great exhibits on the textile industry and the lives of mill workers.  I can’t recall reading a word about the political strife of the 1920s and 30s, even though workers were killed.  In all, it now seems like a sanitized version of the past, with a model of a cute mill village viewed through a rosy lens.  To be fair, I may have missed that part of the history, and will be revisiting the museum in the near future.

Bryant Simon managed to take a difficult subject and report on it objectively and without judgement.  Even though I found A Fabric of Defeat to be very enlightening, I can’t really recommend it to readers who are just wanting to read about fashion.  What I do suggest is that you explore the historical roots of your own state or region, whether it be on the subject of fashion or any other topic.

15 responses to “Currently Reading: A Fabric of Defeat”