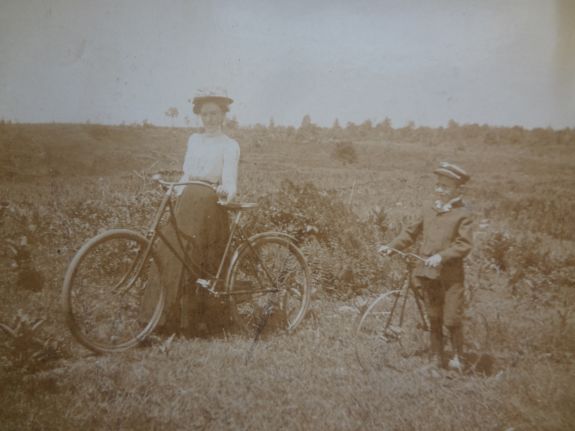 I’m still working on looking closely at antique photographs in order to better place a date on them.  In this case I keep wavering between 1890 and 1898.  The sleeves are slightly puffed, and are too small to be from the mid 1890s when sleeves could have been filled with helium to make the wearer airborne.  That’s a joke, of course, but they were huge, puffy things.  The sleeves did begin to get smaller, with some more conservative styles like this one by 1898.

It does look like the blouse has a very high and tight collar.  This style came in around 1897

The length of the skirt, however, I’d think would be shorter by 1898.  Women played with the idea of wearing knickers while riding, but it was just too radical for most places, and so women bikers settled on a riding skirt a few inches off the ground.

So, help me decide, please.  Meanwhile, here is the news: