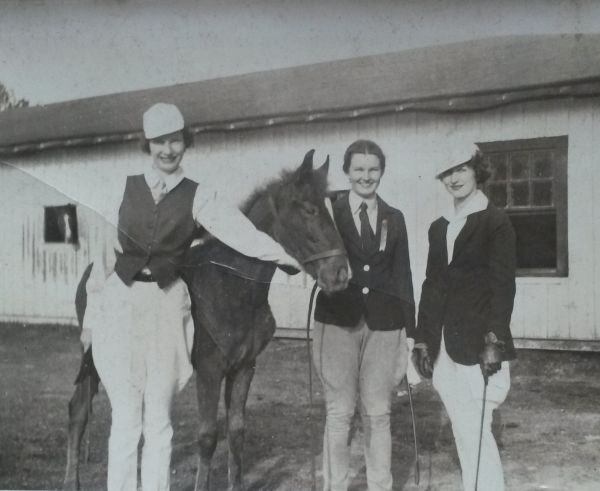 I’ve had a not-so-great automotive week involving a lost set of keys and a frustrating two hour trip that ended up being twice as long.  And now my precious supply of gasoline is disrupted  right before I need it to get to the Liberty Antique Fair.  I’m thinking of getting a horse.  These ladies seem pretty proud of their little guy, but I’m more interested in the one photobombing from the window on the left.  I love a horse with a sense of humor.

Once there, another wait ensued, and so by the time the “show” actually started, models who were standing in a formation of sorts were starting to pass out from the heat.  Angry tweets from the waiting crowd showed the frustration of people who were starting one of the busiest weeks of their year, and yet were sitting waiting for the Kardashian clan to arrive so the show could start.

Not surprisingly, the reviews were brutal, but not just because of the wait and the heat.  Robin Givhan called the show “boring.”   So did Cathy Horyn.   But my favorite statement came from Women’s Wear Daily’s Jessica Iredale who called the relationship between Kanye and the fashion press, “abusive.”

I’ve got to agree.  If this disregard for other people was being practiced by anyone other than a big celebrity like Kanye West, do you think anyone in the fashion press would give a care?  Of course not, so I really had a hard time feeling sympathy for people who know better, but who could not say no to such a big star.  Besides, Anna Wintour would be there, but she certainly did not come in on a bus.

The icing on the cake came in the form of one of Kanye’s famous rants, in which he whined about and threatened the fashion industry.  He needs to learn that in order to get respect, one must also give it.

Please, keep comments about Kanye and the Kardashians civil.