I love finding the odd bits that were published by companies, giving ideas about how to use their products.  In this case it was Wright’s Bias Fold Tape, a product that is still being produced.  Today it is a poly cotton blend, and who knows where it is made, but in 1931 Wright’s made tape in silk and cotton, in solid colors and prints.  I tend to accumulate it and have a full rainbow of vintage bias tape, which I do actually use, mainly for Hong Kong finishes.

These two booklets, both published in 1931, show decorative ideas for using the tape.  It wasn’t just for seam finishing and edging.  To me the booklets are especially useful in seeing the types of things that were inspiring home sewers.

Both booklets had pages on decorating pajamas.  What is really interesting is that early 1930s cotton pajamas found today are very often trimmed with bias tape.  This suggestion was obviously a popular one.

Vintage sellers are thrilled when 1930s pajamas come their way, as they are hot items at present.  They are always listed as beach pajamas (or more likely, pyjamas) but I have a feeling that most of them were intended for sleeping or lounging.  But this was the 1930s, and I’m sure many pajamas saw double duty for both beach and bedroom use.

Another place where one sees bias tape used is on children’s clothing.  As most of it was made from cotton, bias tape was perfect to bind the edges and put a bit of decoration on the dress.

Who could resist a bias tape puppy dog?

Aprons and cotton house dresses were another common use of bias tape, though I can’t imagine any woman taking the time and effort to make the one in beige.

I love the floral decorations on that housecoat.

There were suggestions for home decoration.  According to the booklet, this motif is “a fanciful representation of the flight of the eagle.”

Both booklets had suggestions for making and decorating underwear.  This must have been too much trouble, as I really can’t remember ever seeing more than a few homesewn cotton lingerie pieces from this era, and certainly none that were this decorative.

I am always interested to see what things are called, as I’m afraid we tend to use the current names for clothing from the past.  The booklet calls the pink and lavender pieces “chemise combinations” and the two piece sets are called “shorts and brassiere.”

And what about those pink knees! 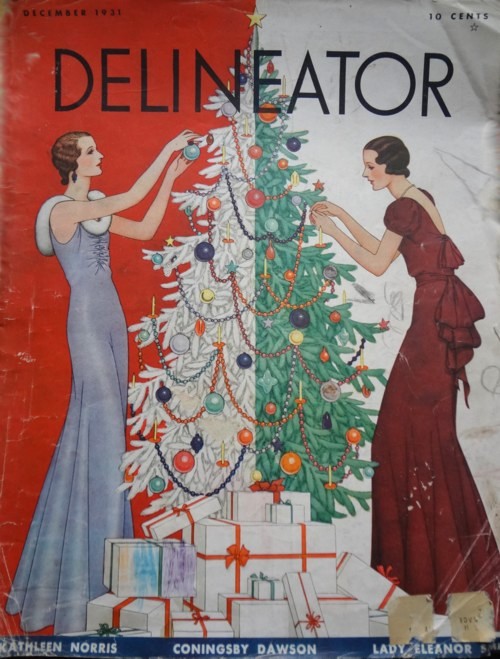 This is one of my all time favorite magazine covers.  And I do think it is interesting that this wonderful illustration was on a magazine targeted toward the average woman who sewed her own clothes, rather than on a magazine geared toward the high fashion set.

The Delineator was published by the Butterick Pattern people, and each month it featured the latest sewing and embroidery patterns along with short stories, recipes and articles on home decorating.  The magazine was very popular through the 1920s, but in the 30s they took a new direction, featuring less fashion and more articles.  Unfortunately, the magazine did not survive.  In 1937 in was sold to Hearst, who combined it with their Pictorial Review.