Who better to tell a housewife how to sew with cotton bags than a group representing the makers of them, the Textile Bag Manufacturers Association?  This booklet dates from 1937, but I’ve seen similar ones from as recent as the late 1950s, just as paper bags were replacing the cloth sacks.  Generically known today as feedsacks, these bags are a hot commodity, selling for at least $10 each, and the best ones selling for $50 and even more.  Wouldn’t those thrifty homemakers from the 1930s be shocked to learn that what they got free with a purchase of flour or sugar are going for such prices!

Sewing with Cotton Bags is thirty-two pages of ideas of what to do with all those bags.  It was revised in 1937, but some of the styles are several years older, left over from an earlier edition.  The drawing above shows a woman who is more likely from 1932 than 1937.

The pleated sleeve shown above left was a common sports sleeve, and I’ve seen it as early as 1932.  I love how the booklet declares them to be “stylish” which is much better word in this case than “fashionable”!

The “Simple Sports Ensemble” on the left was a standard of any active woman’s wardrobe from the early 1930s through the 1940s.  This one is probably from 1935 or so, due to the long skirt and the sleeves that are not gathered.  The tennis dress appears to be from around the same time.

Wide legged pajamas were a 1930s standard.  That set on the left was designed for sleeping, but many women took them to the beach as cover ups.

Cotton sacks were not just for clothes.  You could also use them to make your summer cottage more charming.

They also worked well as a table cover.  I can imagine all the great junk that was stored out of sight, behind the feedsacks.

The patterns shown in the booklet could be ordered for ten cents each, or three for twenty-five cents.  Most are for aprons and clothes for small children, but some, like the blouses, were really quite nice, and yes, even stylish.

I. Miller gives you summer shoes in color taken from the new flower prints.

On to the American Summer scene of glamorous clothes walk  I. Miller shoes in vibrant flower colors.  Nature’s hues selected with the I. Miller genius for color…for costume relationship. 1937

Israel Miller was the son of a Polish (some sources say Prussian) shoemaker who immigrated to the USA in the 1890s.  He obtained work as a cobbler with John Azzimonti,  an Italian immigrant who was making shoes for the theater.  According to an issue of the Boot and Shoe Recorder, actress Sarah Bernhardt once ordered 244 pairs of boots at one time.  When Azzimonti closed the shoe making business in 1909, his customers put in orders for up to thirty pairs.

They need not have worried about obtaining quality shoes, as Azzimonti’s former employee, Israel Miller was already making shoes and would establish I. Miller by 1911.  His operation was moved to a building near the corner of Broadway and 46th Street, which is in the theater district.  He was soon leasing the two brownstone buildings on the corner, and business was so good that in 1926 he bought both buildings and began renovations that would unify them into a single unit.

The resulting building is seen above,  but in 1926 the statues in the niches were not yet in place.  The next year it was announced that statues of four show women would be chosen to represent the arts of drama, comedy, opera, and movies.  The public was even invited to vote for their favorites, the winners being Ethel Barrymore, Marilyn Miller, Rosa Ponselle, and Mary Pickford.  The statues were made by A. Stirling Calder, the father of Alexander Calder of mobile fame.

Unfortunately Israel Miller did not live to see the unveiling of the completed building.  He died in Paris of a heart attack several months before the October, 1929 unveiling.

The Broadway side of the building was quite different from the elegant 46th Street facade.  There were pre-existing billboard leases on that side, and so even in the early days of the store, much of the Broadway facade was given over to advertising.  Today, the main entrance is on Broadway, as that is where most of the traffic is, but when this was a store store to the stars, they entered through 46th Street.

I. Miller shoes closed sometime in the 1970s and the building was bought in 1978 by Riese Restaurants, who ran a TGIFriday restaurant there for several decades.  By the late 1990s Riese was saying the store front would be restored, and though they applied for and were granted landmark status, nothing ever came of it.  Eventually the TGIFriday restaurant was closed, and the building taken over by the Express clothing company.

When I visited New York City in August, 2013, I went by to see the building and was dismayed to see it scaffolded over. In New York that could mean anything from restoration to a complete redoing of the building.  To their great credit, as Express readied the interior of the building  for retail, the exterior was renovated to its former glory.

The four statues had to be removed and restored as they were in terrible condition.  Chunks of marble on the building had to be repaired, the bronze was polished, and the entire facade was given a good cleaning.  Today it is one of the best reminders of what shopping in New York City was like in the early and mid 20th century.

When I first read of the shoe store several years ago it struck me as odd that there would be such an elegant store in a part of the city that was not (at that time, anyway) a shopping district.  A little reading about the subject informed me that this was only one of I. Miller’s stores.  The main store was located on Fifth Avenue, and there were two other New York City branches.  Nationwide there were 228 branch stores and several factories.

The mode for black is charmingly met in.. Monograin silk by I. Miller

As all femininity fares forth in Black, Monograin becomes the overwhelming fashion favorite for wear with the new autumn hats, gloves and handbags of this subtly-woven silk.  1930 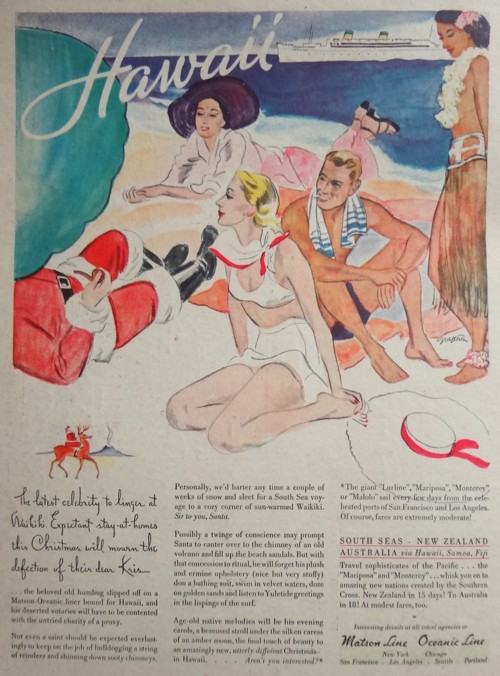 The latest celebrity to linger at Waikiki.  Expectant stay-at-homes this Christmas will mourn the defection of their dear Kris

Okay, I know it is way past Christmas, but I’m with Kris.  This winter has gone on long enough, and I’m not even in the frozen North.  So this week’s ad is to remind us all that it is summer somewhere, and it will soon be warmer here. 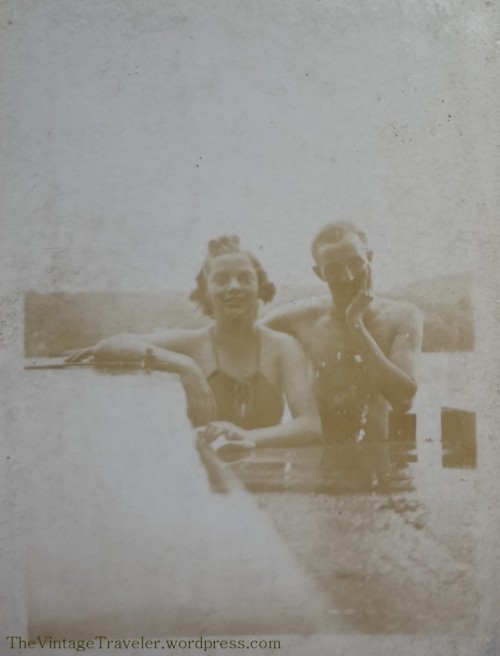 Yesterday I did something that I rarely ever do:  I went to the second main day of a flea market.  Considering that the rainy conditions on Friday would have turned flea marketing from fun to drudgery, I really had little choice.  I’ll give a full report on the finds later this week.  Today I want to share one little bit of excitement.

The photo above is of Shirley Pittinger and a mystery friend.  It was taken in 1939 at Mountain Lake, New Jersey.  It was her bathing suit that caught my eye.

Though it is hard to tell from my photo of a photo, she does appear to be wearing the Jantzen swimsuit above.  It was released in 1937 and was caller “The Uplifter.”  I messed up and did not buy all the shots of her wearing the suit, but in several of them you can clearly see the plastic tips of the ties.

I’m afraid this shows just how easily excited I am.  But while I’m constantly on the prowl for ads that match items in my collection, this is the first time I’ve found an actual photograph of a woman wearing the goods.  So yes, call me easy.

EDIT:  My friend Lynne was able to sharpen up the photo a bit for me:

Thanks so much, Lynne.

Salute to “Lastex” for Ski-O-Twill special ski fabric that stretches… for fit, comfort and freedom

A chorus of ohs and ahs greeted this charming ski costume at the designer’s fashion shows, held while you were romping in the surf.  Where well-dressed skiers congregate this winter this suit will be seen – the last word in the prettification of the ski.  And you might as well be seen in it.

A lot has been written about how the invention of Lastex revolutionized the knit swimsuit, but here it is in a ski suit.  At the time most ski wear was being made from thick wool melton so this must have seemed to be a huge improvement.  But I’m not so sure that it caught on.  I’ve seen quite a few ski sets from the 1930s, 40s and 50s, and none had any degree of stretchiness.  I’d be interested in more information about Ski-O-Twill.

Certain fortunate people combine knowledge that comprehends the best with the means to purchase it.

We should all be so lucky!

Here’s a color combination you don’t see much of – yellow and grey.  In this case the grey is just blue enough to balance out the warmth of the yellow, and the yellow gives a summery warmth to an otherwise “cold” suit.