I look at a lot of vintage photos.  I love nothing more than finding a big box of them at a flea market so I can stand and shuffle through them.  I even look for them online.  Whenever I have a spare thirty minutes or so I’ll often go to Etsy and do some searches for sportswear-wearing vintage women.

That’s how I found the photos I’m showing today.  I usually do not look for lots of more than one photo, but I found a group which contained the same people on the beach in Miami between 1938 and 1942.  It was too interesting to pass up.

The set of photos were taken with several different cameras, but some of the same people kept appearing over and over.  The most common factor in the group is a woman named Sophie.  I’ve come up with the idea that these were her photos, and that she and her group of friends traded them for other photos taken on their days at the beach.  That would explain the different types of photos, plus the fact that there are different handwritings on the various photos.

The oldest photo I have of Sophie is the one above, taken in 1938.  The young man is not identified.

This is Sophie and Harry Lack.

Sophie and Harry again, with a better look at her bathing suit.

A month later, Sophie is wearing the same bathing suit, but she has a new guy to pose with, Lou Shapiro.

And then another month later, Sophie is sporting a new bathing suit, and another new guy, Herb Klein.

The photos end in April, 1942.  Here Sophie has yet another new beau, Irving Saltz.  It would be interesting to know what happened to Sophie.  Did she end up with Harry or Lou or Herb or Irving? Maybe the great and wonderful internet will solve the mystery for us.

Start a new year on the campus… with a new fashion in your hand! Sophisticated, practical bags, as versatile as a jeep, as flexible as 2-way stretch.

There is one for every hour of the day.  Designed by Koret who knows what you want almost before you do yourself.  Pack all your essentials in these style-wise, price-wise bags by Koret.

I’m not sure that these little clutches caught on.  I don’t recall seeing other ads from the early 1940s with them, and in spite of what the ad is trying to say, a hand-held bag is just not practical.   In many photos I’ve seen of young women and students during the war years, the women are using the much more practical shoulder bag.  You can’t blame Koret for trying, though.

Tomorrow I’ll be sharing the story of an extraordinary woman who placed a small part in the history of Koret.

Such a pretty skier!  And how about those sunglasses?  I’m drawn to the glove, as it looks like there is a zipper at the wrist.  Next week I’ll be showing a pair of vintage ski gloves that has a zipper on the back of the hand.

I haven’t read the article by Quentin Reynolds.  I just don’t think I can relate.

In wartime, more than ever, a satisfying smoke is a comfort and a pleasure.  It means a lot to men in the Service and to men and women everywhere.

Here’s a war time ad that has it all:   war bonds poster, attractive woman in a uniform, patriotic jargon and a reminder that the product is “On the Nation’s Front.”

In the US, cigarettes were not rationed, but they could be hard to come by because most of the production was going into soldiers’ ration kits.  My father entered the army in 1944 as a 17 year old.  Grandmother Lizzie agreed to let him go as long as he promised two things:  no tattoos and no smoking.  He resisted the tattoo, but the lure of free cigarettes was just too much. 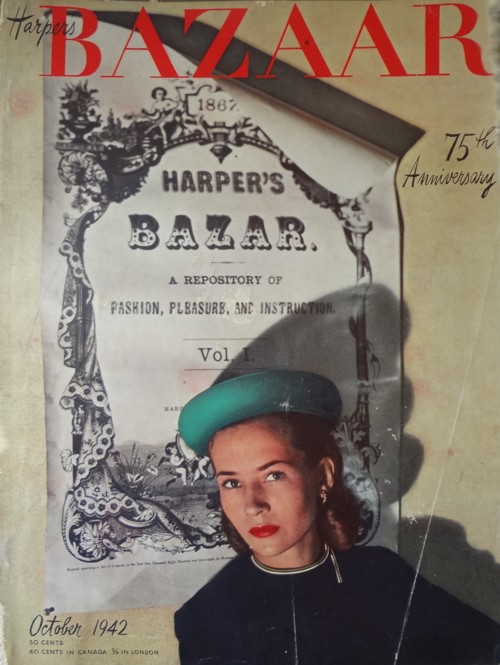 This year marks the 145th anniversary of Harper’s Bazaar.  It was founded in 1867, and is the oldest existing American fashion magazine.  Today, I’m afraid that many consider Bazaar to be the also-ran fashion magazine, but it is hard to underestimate the influence the magazine has had on fashion history and culture.  In the 1920s  Erté was a frequent contributor, not only as an illustrator but also as a creator of original designs.  And in the 1930s, editor Carmel Snow brought in the creative forces of Diana Vreeland, Irving Penn, Louise Dahl-Wolfe and Alexey Brodovitch and then in the 1940s, Richard Avedon and Diane Arbus.

But both Vreeland and Avedon departed for Vogue in 1962, and under the editorship of Nancy White, Bazaar became to be regarded as the less modern of the two magazines.  Bazaar further lost focus in the early 1970s under the direction of James Brady.  Some readers were questioning whether it was actually still a fashion magazine.

Today Bazaar still trails Vogue in both readership and prestige, but pick up a copy from the 1920s through 1950s and you’ll see why for those years Bazaar was such an industry leader.

The year was 1943, and the need for nurses was great.  You’d not even know this was an ad for cosmetics if not for the little line of products across the top of the page and the big Avon logo and the foot of it.

I love looking at magazines from the WWII era, because so many of the ads and the editorial content is about the war effort.  Companies that were not able to continue full production of their product lines advertised anyway, with an emphasis on winning the war.

But what I love most of all is how it seems like there was just such a united front, that all Americans were working for the winning of the war.  Yes, I know there were political differences even during WWII, but how much pleasanter and how much more fulfilling it would be for all Americans to again work toward the common good.

A vest, properly worn.  Too marvelous for words…