Make much of the sun – or make light of it!

I bet the woman on the right in her very Claire McCardell playsuit lived to gloat about her decision not to tan.  She reminds me of my mother-in-law, who when she died at age 90, had the skin of a 50 year old.  She had never tanned; never burned.

I read not too long ago that for the first time since its inception in 1935, Coty was making a big change to the Air-spun box.  The original box was designed by Leon Bakst, one of the designers who worked his magic with the Ballets Russes in the 1910s and 1920s.  Made of embossed leather with real gold leaf, the box turned out to be too expensive, and so it was modified to be made from cardboard.

It remained that way for decades, but now the box is plastic, the charming dancing brushes limited to a ring around the brand name.  I’ve got to wonder why, when a product has instant graphic recognition, would one tamper with what is not broken.

The Strawberry, a singing red…as luscious on your lips as sun-warmed berries.  The Cream, a rich face-powder shade under which every woman seems to bloom.  Together, they give your skin the new strawberry-and-cream look of the season: fresh-and-clean, frankly pretty.

It is strawberry season here in North Carolina, and I’m trying to eat my fill while they are fresh from the fields.  Nothing like a sweet treat that is also healthy to make one feel virtuous! 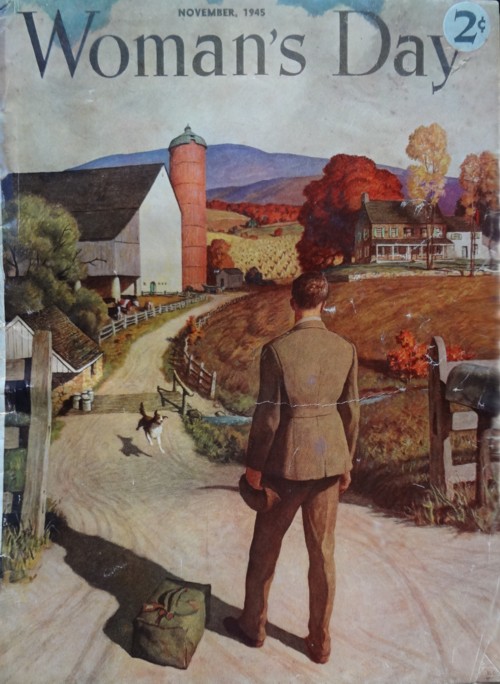 I have shown this cover before, last spring when there was that terrible outbreak of tornadoes and violent storms.  At the time I wrote about how helpful the Red Cross was in 2004 when my mother-in-law’s home was flooded.  I’ll repeat my message:  The Red Cross was on the ground providing food and support within hours of our emergency   I’ll never forget how helpful they were.

For most of us, donating money to the Red Cross and other disaster relief agencies is the best way to help.  But for people living near the damaged areas but who were not affected themselves, there are other options.

In 2004 when our town was flooded, only about one half of the town was under water, and the great majority of the homes in my county were not at all affected.  Most of the people living in the damaged area had families or friends who took them in.  Most people outside the flooded area still had electricity.  And while my own house was safe and sound, it quickly became obvious that for the next few weeks, my life and that of my husband and his brother were to be completely altered while we dealt with the cleaning and securing of my 82 year old MIL’s house.

The morning after the flood we drove the mile to her house, and cautiously opened the door.  Water had reached about four feet inside, and it was pretty obvious that most of her possessions were ruined.  As I’ve said, the Red Cross and the Salvation Army were the first to arrive, letting us know they would be there for us in the coming days.  Before long county officials and FEMA appeared with their lists of how to determine what could be saved and what had to be thrown away, and how to remain safe and on and on.  Then our friends and family members started appearing, ready to get dirty along side of us.  These things were a tremendous help, but honestly, were expected.

What we did not expect were the many small acts of kindness by people we did not even know.  We were working away the first day of cleaning up, not knowing how we were going to eat because none of us had time to even think about it.  A car pulled up and two little girls got out and timidly knocked on the door.  Their mother had prepared a huge pot of chicken stew – a favorite from her region of Mexico – and was offering us some for our lunch.  Later in the day two women came through passing out freshly baked cookies and cups of coffee.

These acts continued through the week.  People came by with rubber boots and trash bags, rubber gloves and cleaning supplies.  One of the local churches organized a nightly supper, involving any group in the area who wished to help, taking nights to plan and serve the meal.  A local construction company stopped work on their projects so their trucks and workers could handle the massive amounts of garbage that were generated by the storm.  And in the next few months, a group of men from a church with which we had no affiliation worked with my husband to rebuild the house.

The one photo from the aftermath of Sandy that has most moved me is one where someone in NYC who retained electric power ran extension cords to the front of the building, inviting anyone who did not have power to use them for powering their phones and devices.  Such a simple gesture, but one that says volumes about the people sharing.  And one, I can promise you, that the people who used that power will never forget.

No wonder the ancients thought the sun was the giver of life… for now we know it holds precious gifts we all need… Today more than ever with the tension of wartime living, the fatigue of wartime work.  Make the most of every opportunity to back in the sun…

In 1945, back in the good old days before photoshop  and other photo chicanery made one question every ad in the big glossy fashion magazine, they had illustrators who weren’t concerned with the literal portraying of a product.    Just give us a pretty and slender young woman out there where the blue begins!

Here’s another Elizabeth Arden ad, this one from 1956:

March is Red Cross Month, and unfortunately, the violent storms of the past few days show why so much aid is often needed in the early spring.  I’m the type of person who prefers to pick local groups that I know are making the world a better place when I decide where to give my charitable dollars, but the Red Cross is an exception.

That is because I have personal experience with the group, and know just how useful they are in the aftermath of a disaster. In 2004 my mother-in-law’s house was flooded due to Hurricane Francis.  Within hours of us beginning the cleanup a Red Cross truck appeared on her street, offering food, medical and cleaning supplies.  After hours of filling garbage bags with her destroyed belongings, that sandwich and cookie tasted heavenly.  And in the hard days that followed, the truck kept coming by, offering other types of help.  I’m still wishing I’d taken them up on those disaster counseling sessions!

If anyone lives in or near one of the affected areas, please post and let us know of any local groups that could also use our help.