Another new color point-of-view originated by Revlon!  It will be seen here (with formal dress in town) and there (punctuating a suntan at Palm springs) this winter.  Watch “Tortoise Shell” … russet with luminous high-lights… special-occasion color for matching lips and fingertips.  By the 4th of July, it will be another smart Americanism!

Despite the name, it just looks like red to me.  Maybe the strategy was to call it something very un-red, and see if women bought it. It’s an interesting concept.

The sunglasses, which were also a Revlon product, are an odd combination of tortoise and bling.  I guess they were designed to blind your beach companions.  The scarf is by Tina Leser, and appears to be one of her wonderful hand-painted creations.

The photographer was Constantin Joffé , and if you didn’t know better, this could pass for a modern instagram photo.  There has to be an app that will put your photo in the sunglass lense!

I’ve been thinking so much about jackets lately, partly because I’m getting ready to start on the Chanel-esque jacket I have planned, but also because I recently lost a wardrobe staple, a black knit sweater jacket.  I’d had the sweater for at least ten years, and probably closer to fifteen, so I certainly got my money’s worth.  And to be honest it was starting to show its age.

A quick look through the stores in the town where my old standby went missing proved to be as fruitless as I suspected it would be.  Everything was so thin the light showed through, and it was all made in Bangladesh.  I knew I’d be making my own replacement.

I really love the jacket in the ad, and now I’m on the hunt for a similar pattern.  I have already made a replacement jacket (to be unveiled tomorrow) but I’m seeing a need for one in Chinese Cherry wool knit.

For a perfect score on the tennis court or any other playtime places, beloved stripes in Shepherd’s figure-flattering version of the cotton T-shirt… with broad and buttoned shoulders.

I don’t know a thing about Shepherd Knitwear but I’m in love with the ad and the product.  Note how the buttons on the T-shirt are also on the cardigan.  And what about that label?

Maybe it is because stripes are so popular right now, or maybe it is collectors like me looking for an item that was usually worn until it fell apart, and was then discarded.  At any rate, keep your eyes open!

I love this cover from March, 1946, though I’ll admit it does confuse me a bit.  By March most people are tired of brown, even if it is this pretty soft dark taupe.  Where are the pastels, the pink?  Why such dark gloves (even though they do match her eyes) and hat?

No matter, I love the strong makeup, the gold earrings and the up-swept hair.  I’m not too crazy about the shoes, and I’m sure that by 1946 most women had had it with such sensible shoes.  And those are shoulders that simply cannot be ignored.

So, should they have saved this one for September? 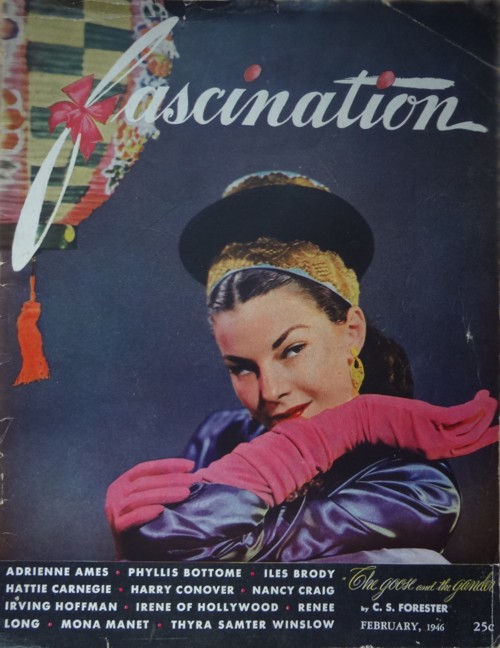 How about a touch of the exotic on this cold and snowy day?  I know it’s exotic because of the carefully placed oriental paper lantern in the corner.

This is a copy of the very first issue of Fascination: The Magazine of Feminine Finesse.  The magazine evidently didn’t last very long, as the latest issue I’ve spotted is November, 1946.  At first I thought this was a publication of the Avon Cosmetics Company, as it was published by the Avon-Fascination Company.  But looking through the magazine I thought it was puzzling that there were no ads for Avon perfumes, and that the fragrances of other companies were featured in the editorials.

I had to dig a bit deeper, so I started with the name of the publisher, Joseph Meyers, and that is where I got lucky.  Meyers was the publisher of Avon Books, which was a pulp paperback and comics publisher.  According to a 1953 Time magazine article, they published  “westerns, whodunits and the kind of boy-meets-girl story that can be illustrated by a ripe cheesecake jacket.”  This magazine is published on the cheap, pulp paper and as a result, has not held up well.

“Fascinating Margo Holliday is Emery Reves-Biro’s choice for cover girl of Fascination‘s first issue.  A native of Lawrence, Kansas, Margo is one of the few successful models who does not, ultimately, have aspirations for a career in Hollywood.  Instead, she insists that her forte is fashion design, and rather than merely talk about it, Margo Margo devotes her every spare moment towards that aim.  Five feet, eleven and one-half inches tall, Margo’s eyes are dark blue and her hair is a rich, naturally curly brown.  The hat she wears for our cover was especially designed for her by Peggy Fischer.”

It may be cold and snowy where you are, but remember, summer is a short five and a half months away!

A big difference in advertising now and in the past is that 60 years ago consumers seemed to have a much greater knowledge about fabrics and fibers.  Today it would be really strange to see an ad for a fabric, but up through the 1970s these ads were commonly found in fashion magazines.  I’m betting that most people these days don’t even know what worsted is.

If you need to brush up on your fabric and fiber terminology, you are in luck.  As I announced earlier, the Vintage Fashion Guild now has a Fabric Resource, and you can learn quite a bit by just reading through it.  For example, worsted happens to be “Fabric made from high-twist, worsted yarns that have long, smooth fibers.”  And don’t forget to click on the fabric samples to see the enlarged fabric.