I dreamed I was bewitching in my Maidenform bra.

This dream goes out at night!  Was there ever such artful magic?  Me… marvelously molded, abra-ca-da-BRA-ed to beauty by my Maidenform bra.  If you’ve dreamed of being bewitching… let your dream come to life with Maidenform.

This October 1951 ad shows probably the most un-witchy witch imaginable with her pretty smiling face.  But at least the props are there – the broom and the cone for a hat.

The I Dreamed ad campaign was one of the longest ever running campaigns for a clothing brand, starting in the late 1940s and lasting through the mid 1960s.  The Maidenform wearer dreamed of everything from sailing down the Nile to being a mermaid.

So, anyone know the slogan that replaced  I Dreamed I…?

To see more of this famous ad campaign...

Two weeks with pay: All fashion, All vacation issue

I chose this particular Vogue cover for this Saturday’s magazine cover because it has so much in common with the one I posted last week.  Both covers have the models’ heads  swathed in fabric.  In this shot the stylist has made a bit of an eye shade with the scarf.  Very chic! 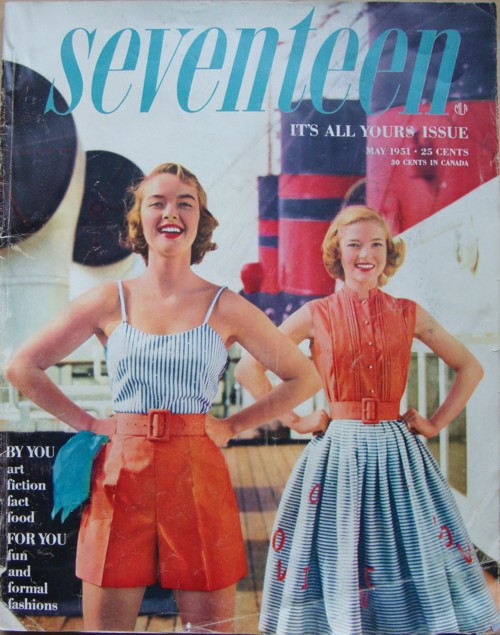 If you look closely at the full skirt, you might be able to pick out the words, “I Love You”, which are applied in felt.  All the separates are by Junior First, a label I’ve never encountered, but they are really adorable.    Also note, they are on a ship.  According to the cover notes, it is the S.S. Queen of Bermuda.  I’m jealous.

In keeping with last week’s theme of sunny colors, here’s a lovely layout from 1951.  The color scheme of the textile is totally unexpected, but I love how the cool purple balances the super warm red, orange and yellow.    Too marvelous for words!

Are these as cute as I think they are?  Sometimes I think I may be overly influenced by the messages sent by the advertising.  In the above ad from 1951, the image of the little colorful boats awaiting their turn, ready to enter Capri’s Blue Grotto hits my travel bug hard.  So I’m thinking maybe I’m being swayed by what I would like to be doing while wearing thess Capri Clogs, rather than being in love with the shoes themselves.

Then I take another look at them, and think, “Naw.. it’s the shoes!”