Catch a perfect wave of color from Cutex

…True color – blended into lipstick with a new kind of smoothness – awash with a frosted gloss!  Cutex, actually Cutex created it.  The perfect combination of the things you loved about lipstick with the modern message of gloss.  Four luscious looks you’d brave the briny for.  It’s the new wave of Fashion – from Cutex, with color coordinated nail polishes.  You’ll find the effect positively tidal.

It’s rather interesting that this is an ad for a product that you can’t even tell whether or not it is being used.  That was the state of lips in the mid to late Sixties though.  The lips were truly barely there, but note the heavily made up eyes.

And also note, there is no bathing or surfer cap!

Twiggy was the Mod “It Girl” of the mid 1960s, and as such her name and image were in great demand.   She was discovered early in 1966 after having her hair cut short. The hairdresser then had professional photos made of her showing off the new cut which were displayed in his salon.  A newspaper reporter saw the photos and then did a feature about Twiggy.  By November of that year she had her own line of clothes and was working on other products that featured her name and image.

Twiggy came to the US in 1967 where her face ended up on the covers of not only Vogue and Seventeen, but also Newsweek.  The tour generated so much publicity that she was able to sign many endorsement deals for products like Trimfit stockings, false eyelashes and toys like dolls and board games.

This photo of twiggy on the packaging clearly shows how the mid 1960s look was all about the eyes.

I was in the seventh grade in 1967, and I can remember getting a pair of fishnet stockings for Christmas that year.  I also got several pairs of pastel stockings, in pink and blue I think, which were worn under the fishnets.  It was a nice effect, and helped keep the legs warm.

If you were around in the 1960s and early 70s, chances are you were in love with the clothes from John Meyer of Norwich.   In my little corner of the world, there were only two shops that carried John Meyer, and both of them were the best stores in town.  Not every girl was lucky enough to own clothes from John Meyer, but the influence of the brand was huge, and one could buy cheaper versions of their beautiful heathery tweeds at places like Sears.  As they say, imitation is the highest praise.

There is currently an exhibition showcasing John Meyer of Norwich at the Mattatuck Museum in Waterbury, Connecticut.  Meyer’s daughter Elise’s collection of clothes from the family company along with photos and other items about the company make for a charming display, and a gives a good account of how many girls and young women were actually dressing in the period that is more associated with the mod look and then the hippie look.

You can see a slideshow of the exhibition on Elise’s blog.  And look for an interview with her here in the near future.

And does anyone recognize the famous model? 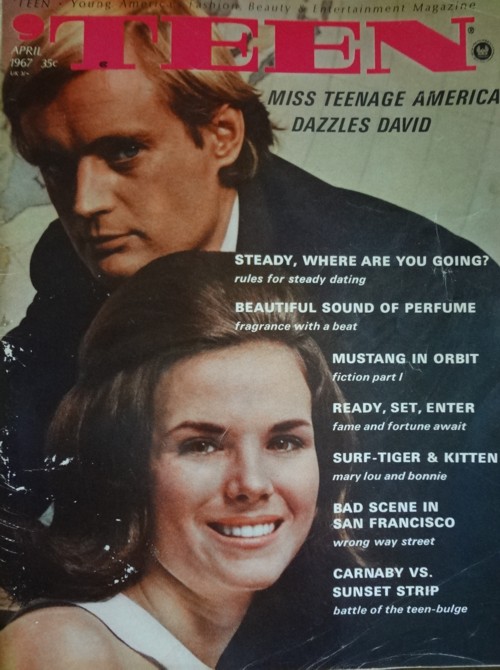 In 1967 I turned twelve, and though I was not quite a teen, this was my magazine of choice.   Though ‘Teen included features on fashion, it was a lot more than a fashion magazine, with features on the cutest boy celebrities, beauty, relationships – all the things I was beginning to be interested in.

What made ‘Teen so great was that it did not seem like it originated from adults.  There were lots of user-generated features including lots of letters about what readers did and did not like, and there were columns that were seemingly written by actual teens.  By comparison, Seventeen seemed very slick and professional.

And in case you were not a boy-crazy nut like me in 1967, the David in the April issue is David McCallum, of The Man from U.N.C.L.E. and the Peter in the June issue is Peter Noone of Herman’s Hermits. 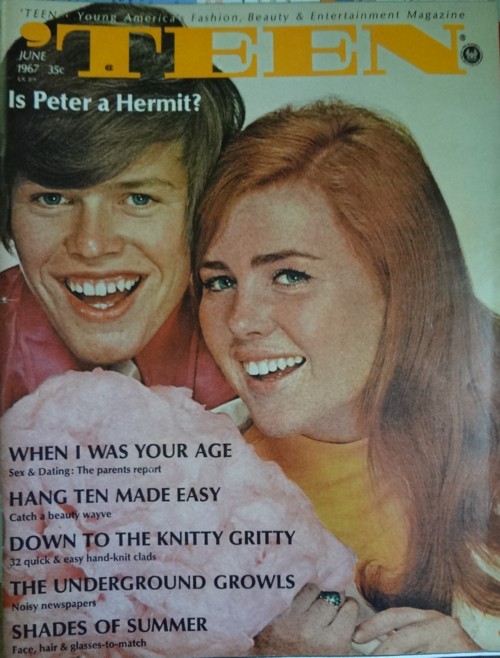 In today’s ad, we see the influence of the “British Invasion”.  I think people generally apply that term to music, but fashion, movies, and even cosmetics looked to Britain after the smashing success of the Beatles’ 1964 US appearances.

Yardley of London is considered to be the oldest cosmetics company in the world, having been established in 1770.  In the 1950s Yardley ran ads in American magazines that featured a slightly creepy (my opinion; creepy is in the eye of the beholder) Madame Alexander doll, holding a bottle of lavender fragrance.  It was a very old fashioned image.

Sometime in the mid 1960s some very smart persons at Yardley decided to cash in on the British craze.  The result was a line of products marketed to teens that were centered around a London Look theme.  The packaging was colorful, the colors the latest in fashion, and the advertising fun.  There were even TV ads that were placed on shows like The Monkees that had a teen audience.

They managed to get one of the most recognisable faces of the London Look, Jean Shrimpton, to model the print ads.  Yardley went from being the brand of grannies to the brand that gave a bit of London cool to girls everywhere.

After all the talk about Ringo in yesterday’s post, I could not help but notice that this lipstick was named the SlickeRINGO.