I’m sure that by now everyone has heard the news of the death of Oscar de la Renta on Monday.  From the time I was first aware of fashion designers in the early 1970s, Oscar has always been on the scene, so it is really hard imagining American fashion without him.

I’ve  said that if I had the money, I’d wear Oscar and nothing else.  A trip to his boutique in New York was always a treat.  It was the type of place where the clothes were always beautiful, but always very wearable by women of many ages.  He will be missed.

When you have the face of a girl and the body of a woman you still want the skin of a baby.

A few days ago I wrote about how teens in the early 1970s were really into little girl prints and ruffles and such, and here is an ad that plays directly to that trend. It is from 1972, and I found it in a copy of Seventeen, which was the major teen fashion magazine of that time.  Ditsy print, ruffled cap sleeves, and curled pigtails:  that was high school in the early 70s.  (But not the exposed midriff, not at school anyway!) 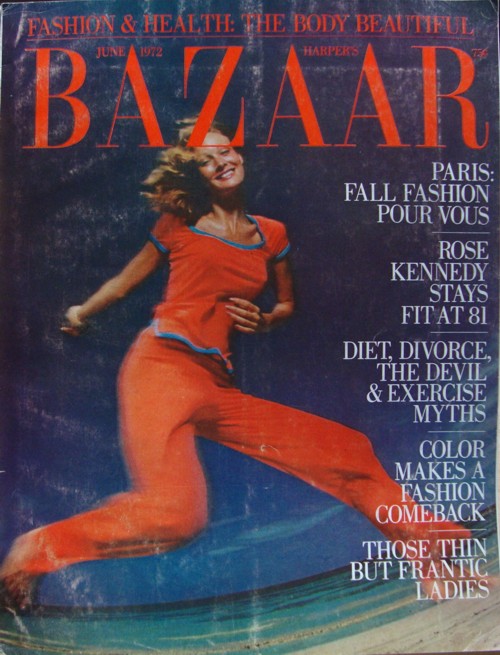 A couple of weeks ago I posted a Vogue cover from 1971, so I thought I’d better give the competition a little boost as well.  In the late 60s and the 70s Vogue covers were, for the most part, head shots, but the covers at Bazaar were often action shots.  This cover from June, 1972 is a good example of a typical early 70s Bazaar cover, with the model leaping down a stretch of beach.

Until early 1972, the editor at Bazaar was Nancy White.  White was pretty much the opposite of Vogue‘s Diana Vreeland, and in the late 1950s both women were up for the editorship of Bazaar.  Vreeland had been working there some time as fashion editor, and the new-comer White had been most recently at Good Housekeeping.  But White had an advantage, as she was out-going editor Carmel Snow’s niece.  White got the job, Vreeland left Bazaar for Vogue, and the rest is history.

Interestingly, while Vreeland was replaced at Vogue for being too flamboyant, White was replaced at Bazaar a short time later for being too old-fashioned.  Her replacement was James Brady from Women’s Wear Daily, who quickly made the magazine more political in nature, with less emphasis on fashion.  He lasted fourteen months before he was fired.

By 1972, the metal zipper was considered to be terribly old fashioned, though the zipper makers continued to produce them for the many old fashioned seamstresses who did not trust the flimsy nylon ones.  (It did not help that the very earliest models on the market were prone to failure, and that it took a while before people realized that nylon zippers and hot irons do not mix.)  My grandmother was one such home sewer who distrusted nylon zippers, though she didn’t have to worry about it much because she had been forced to retire her sewing machine due to arthritis.

But in 1972 I was a thriving sewer, like the young woman in the ad.  If people think that DIY is a new phenomena, then they do not know the 70s.  By the time I started sewing in the mid to late 1960s, all the bugs had been worked out of the nylon coil, and I had no trust issues.

One of the big items of debate is recent years has been the question of the start of the nylon coil zipper.  Thanks to Robert Friedel’s book, Zipper, I can now say with certainty that the Talon Zephyr was introduced to the US market in March, 1960.  That means that any garment with the original Talon nylon zipper cannot have been made before that date.

So it all depends on the little name embossed on the zipper pull as to whether an item with a nylon coil zipper could have been made in the 1950s. 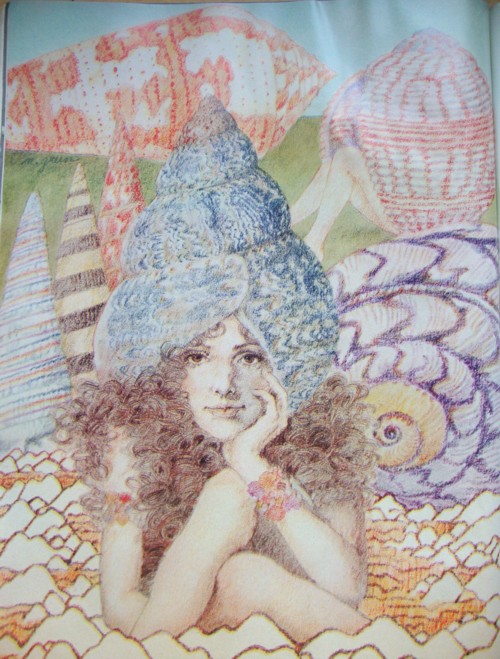 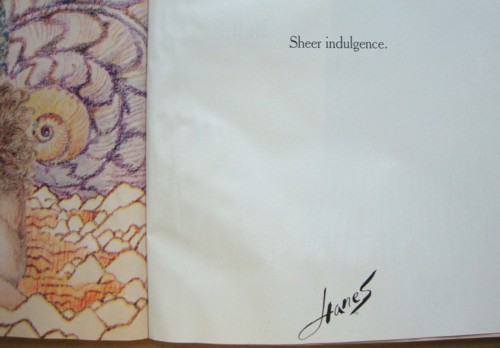 The lady has taste.  Her cigarette is Eve – good looks, great flavor.  Her fashions tastefully modern by Gene Berk for Paganne.  Both are natural choices for ladies with taste.

It was 1972, just one year after Eve cigarettes were launched as a rival to Virginia Slims.  I can’t imagine a clothing company doing an ad campaign with a cigarette company today, but somehow it seemed the thing to do 40 years ago.

From its beginning in 1968,  Paganne was a maker of print dresses.  The owner/designer, Gene Berk, turned out prints that incorporated Op and Pop art, geometric and abstract designs, scenics and prints based on works of art.  The prints were engineered to  fit the designs, as you can see in the dresses in the ads.  Made mainly from knits and printed in Italy, Paganne dresses were often silk knit, but as the 1970s progressed, they also used the popular Quiana nylon.

Paganne closed in 1983, a victim of the economic times and the changing winds of fashion.  In 2006, two European fashion entrepreneurs attempted to reopen the Paganne line.  They were on their way when one of them fell ill and died.  Eventually, new owners were found, trademarks established, and they hope to have the new line available soon.  I wish them well.

Photo courtesy of and copyright of PAGANNE™

By the time this Bernardo ad was published in 1972, Bernardo had been in business for 26 years.  The line was started in 1947 by Bernard and Berta Rudofsky.  Interestingly, there is a connection to Western North Carolina.  In 1944 Bernard and Berta spent some time at Black Mountain College, where he gave some lectures on the sad state of modern clothing.  One lecture was titled “How Can People Expect to Have Good Architecture When They Wear Such Clothes?”

Berta was inspired to get together a class in sandalmaking.  She must have learned quite a bit, because two years later they started Bernardo.  Through the years Bernardo sandals were hand sewn in Italy, the country that provided much of the inspiration for the designs.

In the 1960s and 70s, Bernardos were the brand of choice of the Jet Set, especially after Jackie Kennedy was photographed wearing one of her sixteen pairs of the “Miami” sandal.  As the ad shows, some styles were so popular that they were produced year after year.

I’m always on the lookout for vintage Bernardos, but only have found one pair.  A plus, they came in the original box with the wrapping tissue.

The brand had all but died out when it was revived in the early 2000s.   Some of their special sandals are still made in Italy, with the remainder being made in Brazil, still using the hand sewn method of their past.   And the company’s designs are true to the originals.   Last year, the company released a line of sandals from the Bernardo archive, called Bernardo Icons.

I kept meaning to buy a pair, but I am hard to fit when it comes to shoes so I was afraid to order them.  I was delighted that my local privately owned shoe store carries Bernardo, and so I ended up with a pair. (Note to people in WNC, Tops still has some Icons, and they are in the Clearance Room.)  I can see why they were/are so popular.  For such a flat sandal, they are very comfortable.  But more than that, they look fantastic!

I couldn’t resist a little comparing of the vintage and the new.  It is remarkable how the shape of the sole is  exactly the same in both shoes.

And one more vintage ad.  This one has the same Roman statue foot that is printed on their wrapping paper!

What is so remarkable is that the Rudofskys were intellectuals, not fashion people.  He was an architect and artist, and to learn more about his remarkable life, do watch the video.