Crescendoe gloves give your hands a slim and lovely look…Leather-tailored of wonder fabric that wears longer and washes better.

I’m really not very nostalgic when it comes to fashion accessories of the past.  I had enough of garter belts and stockings and little hats as a pre-teen to do me for a lifetime.  But one thing I really wish I’d gotten in on was the wearing of dress gloves.  I can remember wearing them as a very young child, but by the time I was 8 or so, the wearing of them had passed from being de rigueur to being just one more thing we didn’t want to fool with.

I look at the hands of many women in their 70s and older, and realize their hands look younger than mine.  It has to be that they got much less sun exposure as teens and as young women.   Those $4 gloves turned out to be a very good investment in skin care, and did a lot more good than do today’s $25 hand creams.

Happy first day of spring to you all!

Wesley Simpson presents a group of new scarfs from his collection of designs by famous artists.  Included are scarfs by Marcel Vertes and Salvador Dali.

I’ve yet to find a Wesley Simpson scarf, but I’m always delighted to see “new” ones that are unearthed from the used clothing venues of America.   It made me really happy that art and vintage clothing lover Monica Murgia recently found an especially peachy one. 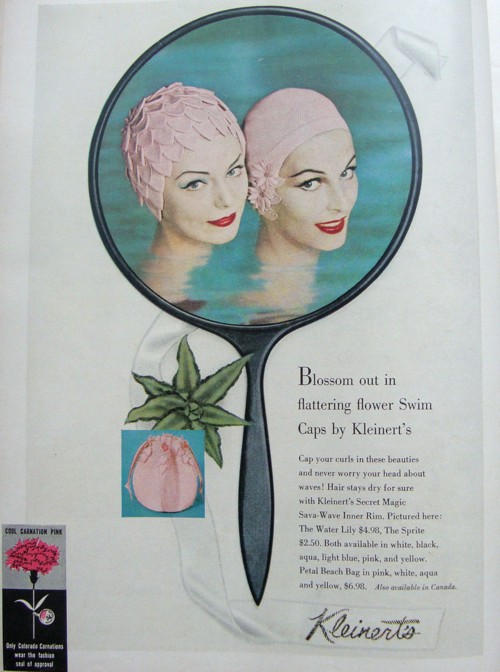 Blossom out in flattering flowering Swim Caps by Kleinerts.  Cap your curls in these beauties and never worry your head about waves!  Hair stays dry for sure… 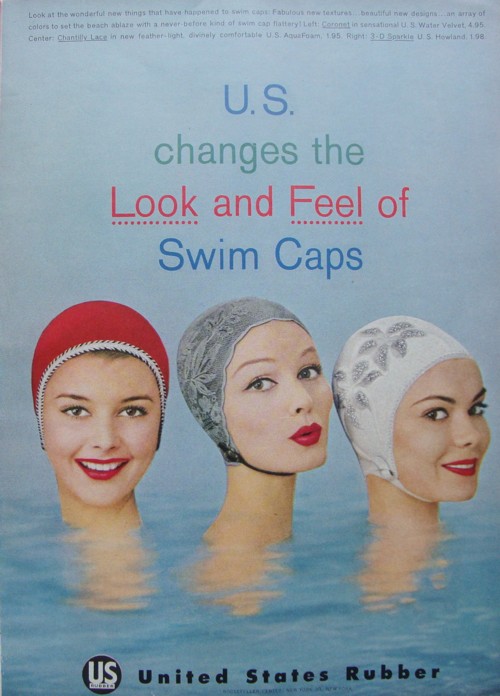 Look at the wonderful new things that have happened to swim caps.  Fabulous new textures… beautiful new designs… an array of colors to set the beach ablaze with a never before kind of swim cap flattery.

Two different ads with two different approaches to selling swim caps, but note how both use the word flatter, and both have cap-covered heads sticking out of the water.  Both ads appeared in the June, 1958 editions of American magazines.

This ad from 1946 gives a bit of a hint of the luxury that was Sulka.  At one time THE place a gentleman in New York went for his shirts and neckwear, Sulka closed its doors in 2002 after a long downhill slide and a noble but failed attempt to resurrect the company.

Amos Sulka and partner Leon Wormser started the company in the 1890s on lower Broadway.  Originally they made uniform shirts for fireman and policemen, and for butlers.  Before long the employers of these well-shirted butlers became clients of A. Sulka, and the business became a shirt and tie supplier to the ultra rich and famous. In the early years of the 20th century they  started a store in Paris, and in the 1920s the New York store moved to Fifth Avenue and there were stores in London’s Old Bond Street and in Chicago.  They even bought a textile mill in Lyon, France that supplied them with fabrics of the highest quality.   Sulka had arrived, and being a customer of the store said that you had arrived as well.

Sulka products were luxury at its finest, and quality that was matched only by stores such as Turnbull and Asser in London. In all the years I’ve been haunting used clothing shops, I’ve run across only a handful of Sulka items, including a necktie that was lined in the same fabric as the tie, and that had an extra piece in the neck to ensure that it fit properly.

So last week when I pulled a gentleman’s silk and cashmere scarf from the Goodwill bins and then saw the Sulka label, I had to suppress a little squeal of delight.

In 1975 the last family owner sold his share of the company, and for the next 15 years A. Sulka floundered as it was sold several times.  In 1989 it looked as though the company was saved when it was purchased by Vendome, a holding company in the business of luxury brands such as Cartier and Piaget.  It is interesting that in my 1996 book, Style and the Man, author Alan Fusser is cautiously optimistic concerning the future of A. Sulka.  Unfortunately, Sulka’s target customers were more interested in Brioni and Ralph Lauren, and the last store closed in 2002.  The trend toward “heritage” brands came a little too late for Sulka.

This Gucci ad from 1973 shows the luxury leather goods maker at an interesting time in their history.  But first, a little background…

Gucci was founded in 1921 by Guccio Gucci, the son of a Florentine hatmaker.  Gucci left Florence as a young man and went to London to find work because the family hat business had failed.  In London he worked at the Savoy Hotel, where he encountered the traveling rich.   After a while he left London to work for Wagon Lit, where he traveled the Continent, again observing the rich passengers and their expensive luggage.  Louis Vuitton, perhaps?

All through the 1920s Gucci made luggage and the various leather containers that rich travelers required.  By the 1930s Gucci had multiple workshops throughtout Florence making goods for his shop, goods that by that time included shoes and handbags.  During World War II when leather became scarce, Gucci turned to canvas, developing a signature printed canvas that led to the famous double-G logo some years later.

In the 1950s the company was inherited by Guccio’s sons and the company began opening stores in large cities in Europe and the US.   By the 1960s Gucci was a well-known luxury brand, becoming a favorite of the “jet set”.

Some of the products most closely associated with the Gucci name were developed in the 1960s.  Their brightly-colored floral scarves were first made in 1966, after Princess Grace visited the Milan store. The first scarf was presented to her as a gift.  Gucci had just begun making leather clothing and now they branched off into silk dresses, made from printed silk in designs similar to the scarves.

1968 brought about the introduction of the ultimate Gucci status symbol, the shoe decorated with the snaffle bit. The double-G monogrammed fabric was brought out in 1969.   When the ad above was published in 1973, logo-mania was just about to hit the fashion world.  As you can see, Gucci was ready for it!

The Gucci story is told in full by Sara Gay Forden, in her book, The House of Gucci: A Sensational Story of Murder, Madness, Glamour, and Greed.  In other words, it’s a fun read whether or not you are interested in fashion.

More from Gucci next week when I show one of the “It” bags from the past.

Bright lucite and jet-black rayon satin in a series of afternoon and dinner bags.

It’s always a treat to find one’s vintage purchases documented in the pages of a magazine or catalog of the era.  I have quite an accumulation of vintage fashion magazines, and I’ve always got a few lying around for entertainment and educational purposes.  I’d had both magazine and handbag for a while when I was thumbing through a 1946  Bazaar, and suddenly it hit me – I HAVE that handbag.

A quick look through my photo files confirmed, that yes, indeed, I’d bought a version of the top bag some time ago.  This is collecting serendipity of the very best kind!

I’m a real fan of gloves, probably because my hands seem to always be cold.  I have dozens of pairs in my collection, but I also buy lots of gloves for me to wear.

If you’ve never taken a good look at the variety of vintage gloves available, spend a few minutes (or hours) on ebay and etsy.  Go slowly, and look carefully, and among all the early 1960s white cotton and nylon shortie gloves, you will find some real treasures: unbelievably soft leathers and suedes, printed leathers, embroidered silks, cashmere lined.  Just don’t settle for the ordinary when there is such an interesting selection.

Another good place to look for vintage gloves is the local antique mall.  Gloves seem to be like hats – you can always spot them in mall booths, even when there are no other clothes in sight.  Odd.