It’s the Fourth of July, and in certain circles, everyone who is gathered at the family cookout will be wearing some version of the American flag on their clothing. in 2019, many people believe that wearing the flag is the ultimate expression of their patriotism. Actually, they may be breaking the US Flag Code.

The Flag Code was written in 1923, and in 1942 it was passed by the US Congress as Public Law 829; Chapter 806, 77th Congress, 2nd session. There were no pentalities attached to the breaking of the Code. Instead, prosecution was left to each state.

Included in the code is a clause of interest to dress historians:

The flag should never be used as wearing apparel, bedding, or drapery.

Prior to the mid 1970s you just don’t see much civilian clothing with actual US flags. My favorite story about this comes from designer Deanna Littel, who in the mid 1960s was one of the young, hip designers at the New York boutique, Paraphernalia.  She designed a shirt made from the little cotton flags that people wave at parades, and found a supplier who could provide the flags by the yard.  The design was ready to go into production when Paraphernalia learned that the DAR (Daughters of the American Revolution) was looking for flag defilers, and that they were prosecuting offenders.  The design was scraped.

The Supreme Court has since ruled that violations of the Flag Code cannot be prosecuted as it is an infringement of the right of free speech. In 1974 a Massachusetts man challenged the law in his state after he was arrested for wearing an American flag patch on his jeans. He ultimately won, as the Court ruled the law violated his First Amendment right to free speech. 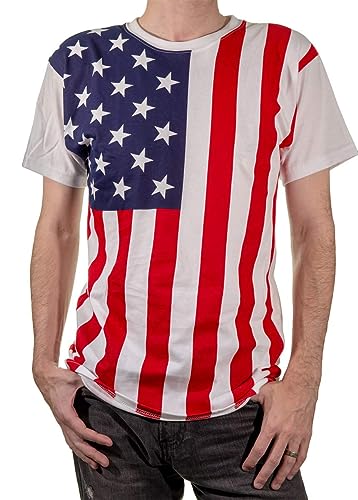 The shirt above was found on Amazon, made by a company named Calhoun. There was no information as to whether the shirt was made in the USA or not. I thought the law says country of origin must the displayed in web stores. I guess I was wrong.

In one of fashion’s great ironies, what was once considered to be dishonoring the flag is now completely accepted by the set of people who  once thought it was so wrong.  There are thousands of flag shirts just on Amazon. It’s pretty clear that the law is not going to be enforced, so why do we still have it?

The latest flag kerfuffle does not involve the modern Stars and Stripes. It’s about the so-called Betsy Ross flag, the one with the thirteen stars in a circle. Sneaker maker Nike developed a USA themed Air Max 1 shoe that featured the Betsy Ross flag on the back of the shoe. As the shoe was being released, Colin Kaepernick, who has starred in Nike ads, protested that the flag comes from an era when people were enslaved in the United States, and thus the flag was not appropriate.

I consider myself to be a strong liberal, with an open mind concerning how offensive matter harms groups. I feel that the age of claiming the “Confederate flag” is a matter of heritage is over. I know that symbols are powerful communicators. But I also feel that this latest flag controversy is a step too far.

As Americans, we cannot scrub clean every single idea, symbol, historic place, document, and so on, that occured before slavery was finally abolished in 1865. It just isn’t possible,and frankly, this latest episode has only served to further divide Americans. There are so many problems that need to be worked through here in the US. To me, the Betsy Ross flag isn’t one of them.

I’ve read that in some white supremacists gatherings the Betsy Ross flag has been flown, and that is a reason for banning that flag. Whether or not that is true seems to be beside the point considering that those people also fly the Stars and Stripes at their meetings. Are we going to ban that as well?

So, is there anyone still out there who thinks that clothing is frivolous?

Hurrah for the Red, White and Blue!

I realize the the old story about Betsy Ross and George Washington and the American flag was pretty much made up by her grandson and is probably about 95% false, but I’d still like to send a bit of gratitude their way.  It’s not that I’m particularly patriotic; it’s that I am really really fond of the red, white and blue color combination.

I realized that I must had sent the message out quite clearly when fellow fashion history blogger and internet friend Lynn recently sent a red, white and blue Vera scarf my way, and she mentioned that she had noticed I favored the combination.  And she didn’t even have the benefit of this view of my closet:

As far back as I can remember, I’ve associated red,white, and blue with summer.  Perhaps that is because the Fourth of July is in summer.   Even though the US Bicentennial was not until 1976, the lead up to it was a very big deal, with the flag colors being very popular throughout the early and mid 1970s.   I was reminded of that this week when I read the Joyatri blog, who had featured a series of magazine layouts from the early 1970s.

Look at Jo’s photos and you’ll see a lot of stars and stripes, but you’ll not see an actual depiction of the US flag, although that shoulder bag is pretty darned close.  That’s because according to the United States Flag Code, the flag cannot be used as wearing apparel.  In the late 1960s and early seventies there were all kinds of challenges to this law, including rock singers and hippies wearing the flag as a cape or as patches on their jeans.  This caused a furor, but times have changed and today we think nothing of the flag being printed on everything from tee shirts to boxer shorts.

My favorite flag/apparel story comes from Deanna Littell who was a designer at the Paraphernalia boutique in the mid 1960s.  She designed a shirt made from the little cotton flags that people wave at parades, and found a supplier who could provide the flags by the yard.  The design was ready to go into production when Paraphernalia learned that the DAR was looking for flag defilers, and that they were prosecuting offenders.  The design was scraped.  The Supreme Court has since ruled that violations of the Flag Code cannot be prosecuted as it is an infringement of the right of free speech.

I’m not the only one thinking of red, white, and blue.  Bill Cunningham’s On the Street video  for the New York Times this week features this summer standby as well.  As he said, “It’s a time for sporting red, white and blue!”