The Call of the Wild from the Hettrick Mfg, Company

Working non-stop to clean out two houses left me with only enough energy in the evenings to search eBay for treasures. Good sporting sources are getting harder to find, but I am good at spotting them. Take this 1920s catalog, for instance. At first its little eBay thumbnail photo didn’t look too promising, and then I noticed the auto tent.

I’m not at all interested in truck covers and tarps, but auto tents always attract my attention.

The catalog is just full of mid 1920s camping supplies. The Hettrick Company started out as a maker of canvas goods, making items for the late 19th century farmers such as horse and wagon covers. They were evidently willing to change with the times, as the 1920s brought cars and more leisure hours. Hettrick turned to canvas car covers and tents.

Today we might look on Instagram to see the ideal camping setup. In the pre-internet days, catalogs sold the perfect camping experience.

In the 1940s and 50s Hettrick turned from canvas items to metal outdoor furniture. Those metal gliders and chairs we all enjoyed as kids could have been made by Hettrick.

The caption for this great drawing could have been written in 2021 as millions of Americans flooded our national parks looking for some soothing nature.

I have two of these wonderful old reclining chairs. It’s time to replace the canvas.

This catalog still has a small selection of wagon covers and horse coats, but as America moved from farms to the cities and suburbs, Hettrick was able to transition to a leisure hours supplier. Funny how the cover focused on their past as a maker of farm supplies instead of what the catalog actually was focused on.

Last November I posted about a 1916 auto trip that a Massachusetts teacher and his wife made, using their car as their accommodations.  The post was based on an article from a 1916 McCalls magazine.   Well, thanks to poster Angela, I now have the entire article in PDF form.  It is located in Google documents, and I’m hoping a link to it will work, but if not, anyone can email me at thevintagetraveler (at) gmail.com and I’ll be happy to send it along to you.

I’ve been rereading part of a very good book on the subject of the history of vacations in the US, Working at Play: A History of Vacations in the United States by Cindy S. Aron.  Specifically, I was reading about auto camping.  In the book, Aron quotes from several similar articles published in the popular press between the years of 1910 and 1920.  The automobile really did open up travel to many people who previously could not have afforded a vacation.

The photos here are a group of four that seem to show some kind of camping village.   These villages, while not completely portable, often sprang up at religious camp meeting sites, and near established resorts.

END_OF_DOCUMENT_TOKEN_TO_BE_REPLACED

Auto-Camping, From Coast to Coast 1916 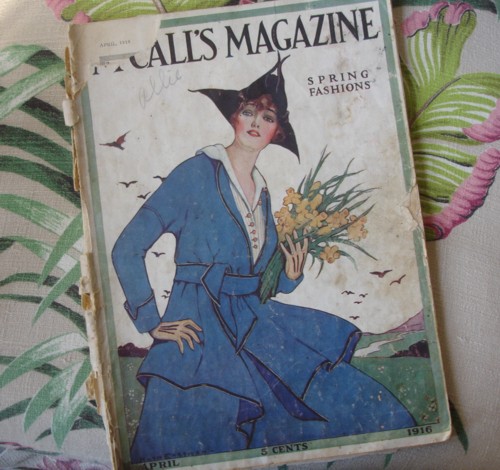 I have so many vintage fashion magazines that I usually don’t bother with the homemaker types such as Ladies Home Journal and McCall’s.  But the one above was older, and I really don’t have many magazines from the 1910s, so I picked it up, seduced by the words, “Spring Fashions.”
Inside I found a deal-making story:  “From Coast to Coast, A Nine-Thousand-Mile Vacation for Two for  $350.”  The story is the first person account of Beatrice Backus and her teacher husband’s decision to drive from Massachusetts to San Francisco during his summer break.  In 1916 the automobile was still relatively new, and many parts of the country did not have any paved roads.  There was no highway system, no AAA, no reliable maps for many places.  But that did not stop these intrepid travelers who decided to auto-camp their way across the country and back. 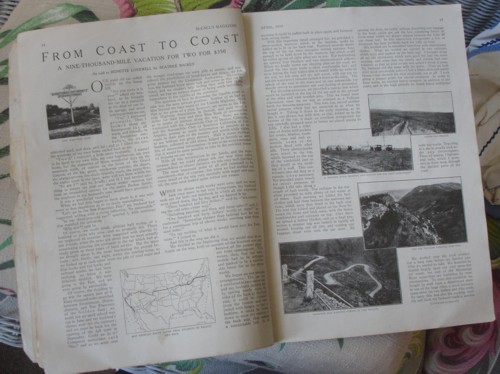 The article details everything to modifications made to their car (they put the back of the front seat on hinges so they could lower it into a sleeping surface) to how much they spent on food and gas (20 cents per gallon!)  In many places they bought their food from farms they passed because there were no stores within miles.
She even described the clothing they took:
“We decided not to encumber ourselves with unnecessary clothes.  What we needed we carried in two suitcases which were also packed on the back seat.  I brought along all my old shirtwaists which were good for just one more wearing, and some that my family and friends had contributed, so that as soon as one was soiled I threw it away.  My husband did the same with his shirts.  Then we both wore good serviceable suits – I had a khaki skirt and middy blouse – that showed the dust practically not at all.  I took along a pongee gown for special occasions.  In order to keep warm, we carried heavy sweaters, in addition to our coats, and in the high altitude we found heavy underwear none too warm.  Traveling in a car is usually cool under any circumstances.  Then, of course, I had several veils, which I wore, two or three deep, through the dustiest parts of the road.”
(Pongee is a type of silk, naturally tan in color, and often coarsely woven.)
The trip took eleven weeks, and with the exception of a night or two in a hotel in Denver, every night, even in the city of San Francisco,  was spent in the car. 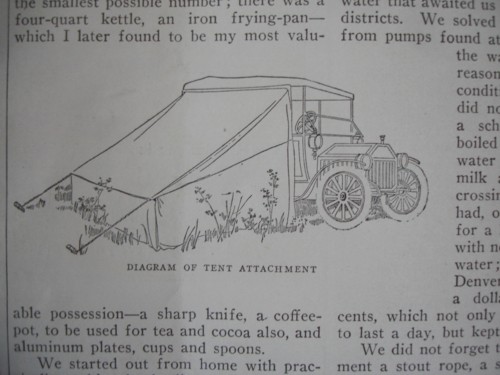 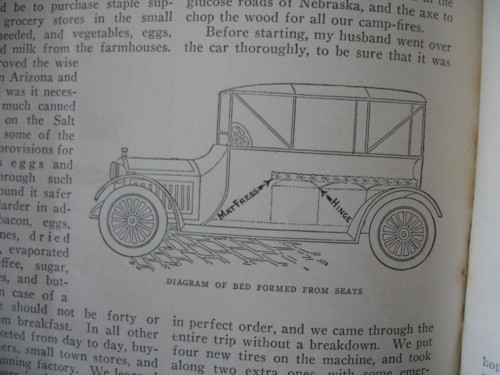 And just to prove people were doing such things, here’s a photo from my collection showing a similarly inclined couple.  By the looks of that tent, they got a lot of use from it.

The 1910 Abercrombie & Fitch catalog explains the appeal of auto camping:
“This is the very newest out-of-door sport and the complete outfits of its originators were designed and built by us.  We catalog automobile tents, sleeping bags, cooking outfits, food outfits, in a word, complete automobile camping outfits which will enable the owner of a touring car to take a party for a trip completely across the continent without being dependent on hotels or even stores for accommodation or food supply.  It is a splendid sport and the mobility of the motor car gives a marvelous travel range to those who engage in it.”
The term “auto-camping” slowly fell out of favor, perhaps because the tent was replaced by the travel trailer.  Sometimes, though, you see the two concepts intermingled, as in this 1930s photo of a trailer camp.

END_OF_DOCUMENT_TOKEN_TO_BE_REPLACED

I’ve found some really wonderful vintage photos lately, everything from 1910s girls playing tennis to family camping scenes.  This one is a favorite.  Just because you are out in the woods and living in a tent does not mean that you should not wear your favorite nightgown and cap.

For the past several nights I’ve been glued to the TV, watching the PBS series on our national parks.  It’s a fascinating story about how the park system came to be, and anyone who does not believe that one person can make a difference in the world needs to watch this.  Many of our parks owe their existance to the efforts of one individual.

But to me, the most interesting part was a scrapbook that a woman from Nebraska had kept.  She and her husband started visiting the parks in the late 1910s, and they continued to travel around the country visiting the parks until his death in the late 30s.  The changes she notes are just staggering.  In the early days they had the parks practically to themselves, but the advent of the automobile made the parks accessible by many more people.  Travelers would camp just where ever they could find a spot to park.  Trash became a serious problem, along with traffic congestion and air quality.

It’s been really interesting watching the women’s clothing, too.  No nightgowns, that I’ve spotted yet!