Before anyone gets too excited, this uniform is a reproduction. I’ve been wanting an actual AAGPBL uniform for years, but the reality of ever finding one is quite small. There was a very limited number of them made to begin with, and many of these are rightfully in museum collections. Still, a girl can hope.

I found this reproduction at the Goodwill Dig. I knew it was not the real deal, being made in China of a cheap poly/cotton mix. But it was too interesting to leave behind. I contacted the AAGPBL website, and the nice people there told me that a company licensed the design to make these as costumes. And a search on Instagram shows lots of women dressed in this Rockford Peaches costume.

I added the bias binding belt, as the photos show a dark red belt.

The AAGPBL became famous due to the movie, A League of Their Own. I’ve written about the league in the past:

Started in 1943 by Chicago Cubs owner Philip Wrigley in order to keep revenue flowing through Wrigley Field during the war [WWII], it was originally a softball league. The name was changed to baseball, and the rules were a mix of both games. Wrigley came up with the idea of the players wearing skirts with little bloomers beneath. He felt like skirts were more womanly.

He also mandated that the players could not wear slacks off the field, and they must always wear makeup and lipstick, and wear high heels when not playing. There were lots of rules, but the pay was good.

The league was started in 1943, and lasted until 1954. All the teams were in the Midwest, mainly in smaller cities, like Rockford, Illinois. Many of the cities that had teams now house uniforms and memorabilia in their municipal museums.  The Grand Rapids Public Museum has a nice collection of that city’s team, and last year curator Andrea Melvin wrote a great research report on it for the Costume Society of America’s journal, Dress.

It’s not likely that one of these uniforms will turn up here in Western North Carolina, but then no one expected to find Vince Lombardi’s West Point sweater here either. A girl can hope.

A while ago I found an interesting item at a local antique mall, a 1938 scorecard for women’s softball games at Madison Square Garden. There was a league – the Metropolitan Women’s Softball League, and other leagues across the country as well. Because of the movie, A League of Their Own, the All American Girls Baseball League of the 1940s is well-known, but I’d never heard of  a women’s softball league.

Growing up, I was well acquainted with fast-pitch softball. Our local YMCA, which was administered by the town’s primary employer, Champion Fiber and Paper, fielded a team, the Champions of Canton.  It was a team of men, and I don’t remember there ever being a woman’s team.

The Champions were big in Canton. Rumor had it that any excellent ball player could get a job at the paper mill, and I’m sure that’s the way it worked all over the country. Many factories and other businesses had softball teams, and competition for the best players was high.

After finding the scorecard, I went on an internet search for information about the Metropolitan Women’s Softball League. The best find was a series of photos of the New York Roverettes and the Americanettes with Babe Ruth, taken in 1938, the same year as my scorecard.  (I linked to the photos, because I don’t use photos from Getty on my blog. They have been known to sue.)

The uniforms were interesting and quite flashy, being made of colorful satin fabric. By the late 1930s most women’s teams had adopted shorts, but some more conservative communities in New England and in Arizona’s Cactus League fielded their women’s teams in long pants.

Wanting more information led me to Erica Westly’s book, Fastpitch: The Untold History of Softball and the Women Who Made the Game. Westly tells of how softball started as an indoor sport, but by the 1933 Chicago World’s Fair, it had moved outdoors. It was the 1933 Fair that helped popularize the game. In 1938 it was again played indoors, at Madison Square Garden. In biweekly games the New York Roverettes would play visiting teams from around the country and Canada.

The back of the program gives us a look at the types of businesses that sponsored teams. The Num Num Girls of Cleveland were sponsored by a potato chip maker. The Newark Poppy Mills was a knitting factory.

Here’s the scorecard of the International game between the Toronto Langley-Lakesides and the Roverettes. Interesting that all the coaches and managers were men, though that began to change in the 1950s when women were allowed in the management ranks, and for the first time, Black women were allowed on the teams.

Fastpitch gives a good look at the origins of The All-American Girls Professional Baseball League.  Started in 1943 by Chicago Cubs owner Philip Wrigley in order to keep revenue flowing through Wrigley Field during the war, it was originally a softball league. The name was changed to baseball, and the rules were a mix of both games. Wrigley came up with the idea of the players wearing skirts with little bloomers beneath. He felt like skirts were more womanly.

He also mandated that the players could not wear slacks off the field, and they must always wear makeup and lipstick, and wear high heels when not playing. There were lots of rules, but the pay was good. Many of the best softball players gave up their satin shorts to play in Wrigley’s league.

Seeing the Smithsonian’s South Bend Blue Sox baseball dress made me wonder if any of the much more common satin shorts ensembles are in any museum collections. I found a site for the National Softball Hall of Fame which is located in Oklahoma City, but there is little information on the site about the collection. I would bet that there are many located in local historical society collections. Get in touch if you know of one. 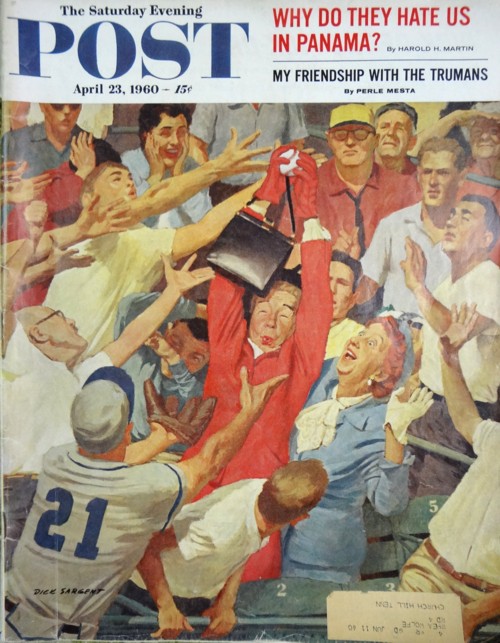 I love old film footage of people going to baseball games in the past.  The crowd is overwhelmingly male, and even into the 1960s many of the men are dressed as if they had sneaked off from work early.  Of course, people just dressed more formally, even for an event like a baseball game.

I can’t help but love the two women who are dressed more like a day shopping than at the ball park.  And I can’t imagine a more delightful pair with their gloves, hats and pocketbooks.

Going to a Yankees game was on our short list for this week.  I’ll let you know if I was as lucky as the lady in red.

The artist of this Post cover was Dick Sargent, not to be confused with the actor who took the same name.  Not only did Sargent illustrate 47 Post covers (including Point Lookout that I posted last week), he did print ads and movie posters.