Back around the Turn of the Century, fashion dictated that you run around the tennis courts in layers upon layers of clothes.  That made you look elegant when you moved.  If you could move.

I can only imagine the thousands of words that have been written by scholars of women’s studies about the Virginia Slims ad campaign and their crazy mixed message of “You’ve come a long way,” and then, “baby.”   I am old enough to remember when the ads came out in the late 1960s, and though I was barely a teenager, I was irked by the mixed message.

In case you are not old enough to actually remember the ads, they put a recreated scene from the past showing how it was for women in the “good old days,” and then the way it was in the early 70s after women got their own cigarette.  The recreated scenes showed an interesting mishmash of Edwardian looking clothing on women who were usually sneaking a smoke.

In the “old” photo above the two tennis players do look overdressed, so what were women wearing to play tennis in 1905?  According to tennis player Violet Sutton:

But it’s a wonder we could move at all.  Do you want to know what we wore?  A long undershirt, pair of drawers, two petticoats, white linen corset cover, duck shirt, shirtwaist, long white silk stockings, and a floppy hat.  We were soaking wet when we finished a match.*

So change these women into white stockings (and shoes as well) and it looks to be fairly close to Violet’s memories.

Last week I spotted this pinback button in an antique mall. The button was made for the Virginia Slims Tennis Circuit which was started in 1970 and lasted until 1995.  Philip Morris, the maker of Virginia Slims sponsored professional women’s tennis, helping women players achieve pay that was equal to that of men players.

The ad is from 1972. Look carefully at the model’s sweater as it features the smoking tennis player logo. You could order the sweater for $9 plus 2 pack bottoms from Virginia Slims cigarettes.

*Interview with Violet Sutton recounted in “The Sutton Sisters” by Jeane Hoffman, published in Fireside book of Tennis, 1974, quoted in When the Girls Came out to Play, Patricia Campbell Warner, 2006

Unnumbered miles slip away from the Limited…sagebrush and sand and a painted desert…mountains stark above timberline. But through all the changing scene, this cigarette will be your best companion.  Fragrant, refreshing, dependable, it adds the flavor of enjoyment to your journey…And whether you travel three days or three hours, you know that you’re going some place, when you go with Camels.

Because of the reference to sagebrush and sand, I assume this ad is talking about the Sunset Limited, which runs between New Orleans and Los Angeles. About twenty years ago we got the idea to take a long train trip, and we settled on the Sunset, traveling from New Orleans to Tuscon, Arizona.  Most of the trip was through Texas, and I can tell you that is one big state with lots of sagebrush and sand.  It would take more than cigarettes to make all those miles slip away.

The ad makes train travel look so chic.  In 1995, the dress of most travelers was very casual, though I expect that today many are shuffling around in slippers and pajama pants.  And of course, the train is now smoke free.  At least some things are an improvement!

In wartime, more than ever, a satisfying smoke is a comfort and a pleasure.  It means a lot to men in the Service and to men and women everywhere.

Here’s a war time ad that has it all:   war bonds poster, attractive woman in a uniform, patriotic jargon and a reminder that the product is “On the Nation’s Front.”

In the US, cigarettes were not rationed, but they could be hard to come by because most of the production was going into soldiers’ ration kits.  My father entered the army in 1944 as a 17 year old.  Grandmother Lizzie agreed to let him go as long as he promised two things:  no tattoos and no smoking.  He resisted the tattoo, but the lure of free cigarettes was just too much. 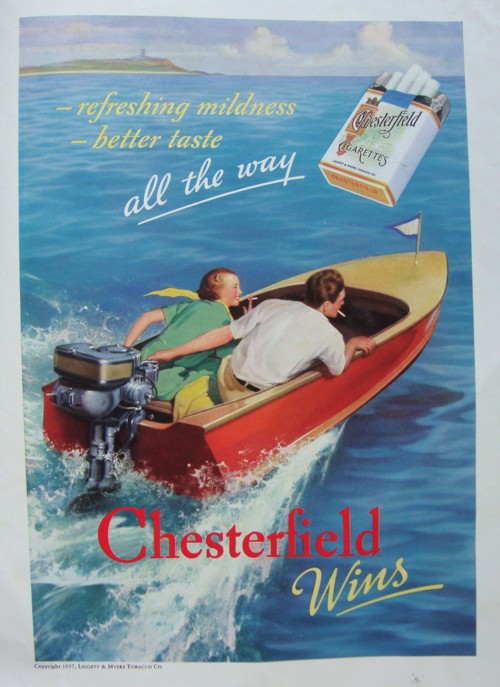