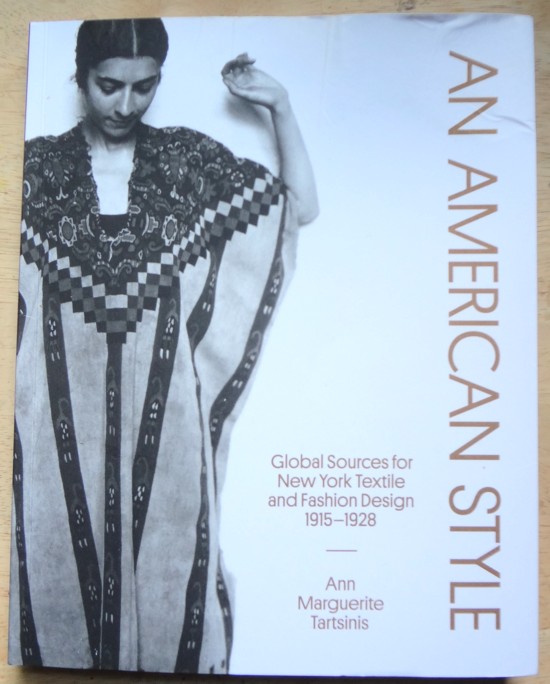 We all hear about the big fashion shows at the Metropolitan and the Fashion Museum in Bath, UK, but there are lots of smaller institutions which work hard to present fashion and design history, often from a very narrow focus.  One such institution is the Bard Graduate Center in New York City.  Last year they presented a show based on the research of Ann Marguerite Tartsinis.

Tartsinis had been researching how starting in 1915 the American Museum of Natural History worked toward developing a distinctively American style, which would be based on Native American artifacts. World War I had broken out, and New York was deprived somewhat of the Parisian influences that were so much a part of American fashion.  Leaders at the museum saw this as a good time to interest designers in developing a uniquely American design language.

A design center was set up at the museum where designers could go and study artifacts, everything from Peruvian textiles to Navajo basketry, Inuit fur work to Arapaho beadwork.  The idea was not to copy the designs, nor to simply reproduce depictions of the objects.  Instead designers were to come up with their own interpretation of the original work.

The museum curators were successful in getting some designers to develop both fabric and garment designs.  In 1919 the museum put on the Exhibition of Industrial Art in Textiles and Costumes, which showcased these designs, along with the original artifacts which had inspired their making.

But by 1919 the war was over, and designers were casting a more global eye.  The design program lasted until 1928, but in a greatly reduced capacity. And while the program did not have the huge effect the curators had envisioned, it did show how museums and designers could work together to promote good design.

The 2013 exhibition at the Bard Graduate Center centered on the 1919 exhibition at the American Museum of Natural History.  One of the resources for the new exhibition were photos that had been taken of the original.  You can see these photographs and read more about the exhibition in an excellent feature on the Bard website.

I missed seeing the exhibition, so I was glad when Lynn of AmericanAgeFashion suggested this book to me.  She knew that I’d like the book because of my interest in the cultural influences of fashion.  It also gives a look at how appropriation was viewed one hundred years ago.  As you might imagine, the attitudes of 1915 are very different from our twentieth-first century ones.

A very important issue was brought up by Tartsinis in discussing the difficulty in locating artifacts for the 2013 exhibition.  While they were able to locate quite a bit of archival material, the artifacts themselves were extremely hard to locate.  As Tartsinis put it, “The scarcity of surviving examples from this period reflects not only the institutional preference for collecting couture and upmarket garments and textile samples, but also underscores the anonymity of individual designers in textile manufacturing and department stores at this time and the fleeting nature of this movement.”

I like a good label as much as the next collector, but what a shame that in some institutions a design is not deemed worthy unless it has that all-important designer label.  And as for the anonymity of the designers, I suspect that some of this material is actually in collections, but that it has not been identified as being part of the 1919 exhibition.  Hopefully as more and more small museums get their collections photographed and online, things of this manner will start to be identified.