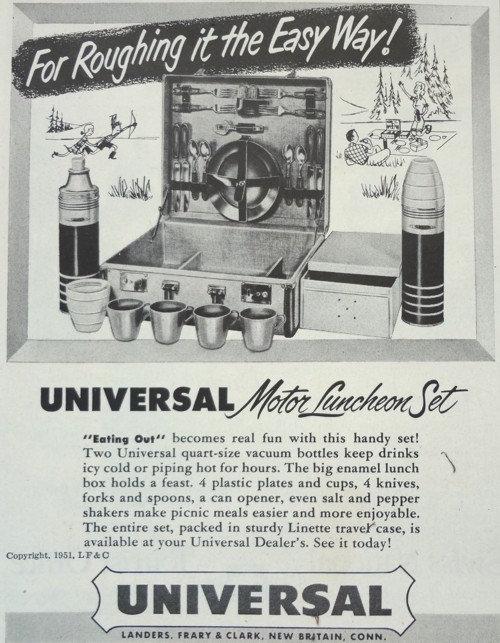 “Eating Out” becomes real fun with this handy set!

I’ve been wanting a picnic set like this one for a very long time.  I see them from time to time, but they are always incomplete or in terrible condition, or costs more than I want to pay.  But I’ll keep looking.

I could use it this week, as I’m unexpectedly hitting the road tomorrow.  Along with a family visit, I’ll be taking in a few exhibitions in Washington, DC which I’ll be sharing next week.  I’m really excited because the Ballets Russes show has just opened at the National Gallery of Art.   I’ll be spending a few hours in the National Museum of American History and then I’ll be seeing the exhibition I mentioned Sunday that is at the DAR Museum, Fashioning the New Woman: 1890 – 1925.  And then on the way home, I’ll be doing a bit of vintage shopping.  Wish me luck! 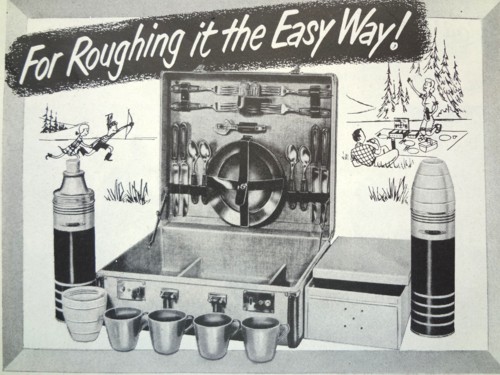 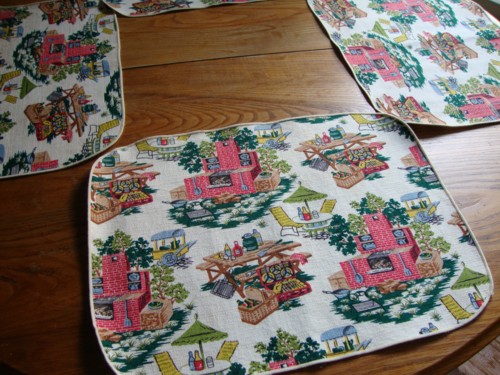 September is looming, but there’s still time for picnicking and backyard grilling.  And aren’t these just the perfect place mats for the job?  I found these some time ago, and possibly even showed them off a little, but a lucky find last week made me want to write about the whole post WWII backyard culture. 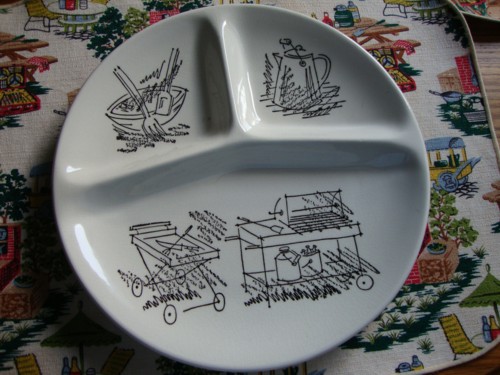 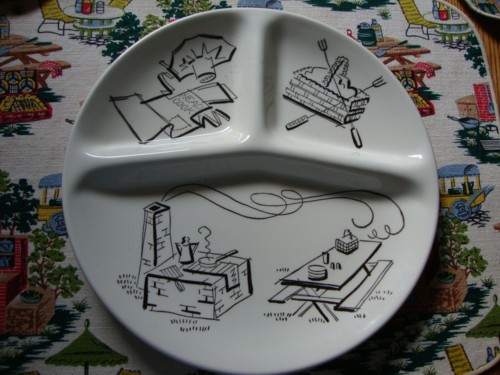 The lucky find being these grill plates.  Same theme, different approach, but still exactly right for the 1950s.

Some times when looking at prints like these and at post-war advertising, you get the feeling there there must have been a brick barbecue grill in every backyard; that it was a necessary part of the landscape.  And while it is true that there was an awful lot of grilling and picnicking going on, most people I knew just had a portable charcoal grill.  All the boomer-daddys I knew were too busy trying to make a living to support us all that they didn’t have time for masonry projects.  And just speaking for my own dad, when he did have time off, the last thing on his mind was unnecessary work.

But, it must have been a popular trend, as the Popular Science and Popular Mechanics magazines of the day are full of instructions for brick grills and barbecue pits.  And I do know of one such homemade grill.  It was made by my Great-Uncle Corky.  He was a real DIYer, with a woodworking shop in the basement, and lots of little buildings around that he had made.  He made birdhouses to hang from every tree and post, and there was a great fake wishing well.  But the showpiece of his backyard was the grill, made from brick he had gathered from here and there.

Here is the only photo I could find of it. Uncle Corky also had a knack for odd photo compositions, managing to include many people in one shot, but making most of them unrecognizable in the process!  That’s my dad on the left, and then Uncle Ray.  The woman seated is my mother.  The stool she is perched on was also made by Corky, as is the table behind it.  Both are made of concrete, and were about the sturdiest things imaginable.  (I’ve now got to go by their old house and see if they are still there.  My guess is yes; how does one dispose of a huge concrete slab table?)

They were used a lot.  My grandmother’s family loved a good cookout, and we always had them at Corky’s, for obvious reasons.

As a kid, I wanted to grow up and live like Corky and Adore, his wife and my grandmother’s sister.  They had the most stereotypical Mid Century American life of anyone I knew.  From the backyard picnic ground, to the Chevy station wagon, to the annual trips to Florida and long Sunday drives on the Blue Ridge Parkway, I could see that they were living the good life. 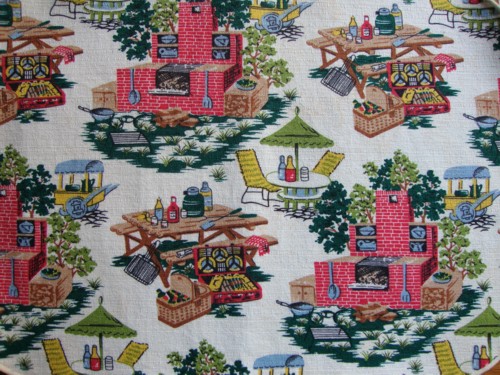 Even came in a lightweight aluminum carrying case, complete with salt and pepper shakers.  Just add food and go!

I love this ad and its post-WWII family, playing happily at the lake.  Contrary to the way it looks, Dad IS wearing trunks behind that ball.  The artist just chose an unfortunate color that tends to blend with his skin!

I’ve been thinking about buying a vintage picnic kit, but I have not come across one that sings to me.  I love the red plaids from the 50s and 60s, and so may go with that, but I’m open to suggestion.  I’m also on the lookout for one of those Esso Skotch Kooler jugs with the USA map graphics.  I see them quite often, but the condition is always a problem.

Do people picnic any more?  I can’t remember the last time I’ve even heard the word, much less been on one.

When I was a kid, in the early 1960s, picnicking was a very  important part of summer.  I grew up here, in the mountains of Western North Carolina, where there were lots of great picnic sites – many of which have disappeared.  My favorite was probably a roadside area with lots of tables, located on the road between Cherokee and Maggie Valley.  It fell into disrepair about ten years ago, and when the state widened the road, the picnic area was destroyed.

Another favorite place was Mills River, a state park that is still open.  There is camping there too, but my family usually went on Sunday afternoon, along with some of the other families from our church, for some swimming and a great picnic lunch.

There still are some places in North Carolina, where the state maintains picnic tables along the side of the road.  One place I know of is in the Nantahala Gorge, between Cherokee and Andrews.  Today you can sit with your picnic and watch world-class kayakers on the Nantahala River.