While shopping recently I spotted this 1950s poodle novelty print apron.  I’d seen the print several times before, mainly on a facebook page that is devoted to vintage novelty prints.  I snapped a shot for Instagram, and then forgot about it.

Then a couple of days later, Susan at NorthStar Vintage found the same print but in pink.  It got me to thinking about how common a practice it was for companies to offer prints in different colorways.

So I took to the internet in search of more poodles on different colored backgrounds.  The brown and tan version above is for sale at Heartbreaking.  What made her listing so great was that a shot of the selvage was included in the description.

John Wolf Textiles was registered for business in 1946 as a maker of home decorating fabrics.  The prints were perfect for curtains in a child’s room or kitchen, and were also intended for use as aprons.  But they were also used in clothing, and today gathered and pleated skirts are highly prized by collectors.

As was often the case, the fabrics were available to home sewers and to commercial clothing manufacturers.  The prints were not exclusive to any one maker.

This dress (for trade on Facebook by Leslie Coward) with the poodles on blue and black was a manufactured item.  Note how a bit of the stripe accents the bodice.  Also note there is a band of black at the hem that was added.

This dress was sold at Sears, Roebuck.  I also spotted the identical dress in an early 1960s Lana Lobell catalog.  You will have to click to see the catalog page because I found it on Pinterest and there was no way to establish who the originator of the photo was. (This is why I hate Pinterest…)

And here is the identical dress in green, which has been sold, but was in the FrocksnFrills shop.  This dress was sold by JC Penney, under their Brentwood label.  The poodles have buttons for eyes, and you can just barely tell that the black and blue version sold by Sears also have buttons for eyes, as does the one sold at Lana Lobell.

According to the Lana Lobell catalog copy, they sold the dress in black/blue, brown/tan, and mint/dark green.  I just find it interesting that the identical dress with different labels could be purchased in at least three places.

Although this print is not an exact match, I think it is close enough to be included here. The poses of the dogs are identical in both prints, but the dogs playing dress-up are a bit less poodley. Still, I think it shows how ideas evolved and changed, or perhaps, how ideas were “borrowed”.  This skirt was sold by Cheshire Vintage.

The facebook group I referred to, Novelty And Border Print B/S/T, is a great one to be involved in if you like novelty prints, or if you just want to learn more about them.  People in the group are very knowledgeable, and someone is always posting a new find  from a catalog to help document a print.

If anyone reading has this print in a different colorway, I’d love to show it off along with the others.

Edited for addition of photo.

Filed under Made in the USA, Novelty Prints, Textiles

This is all I have of the best gift wrap ever.  It was on a gift from a vintage friend several years ago, and she must have loved it as much as I do because she was doling it out in the tiny sample you can see.  I think she was being quite generous, as I’d have kept it all for myself.  I mean, Santa and a martini.  A man after my own heart!

I’ve been on a quest for vintage Christmas wrapping paper ever since I stumbled across the flickr pages of xtinalamb.  If that’s not enough, then check out the Vintage Wrapping Paper pool.

And here’s one I found  on etsy.  I would say to hurry over there and buy it, but I weakened and now it is mine:

And then a few months ago, I found this great Scottie paper from the 1940s: 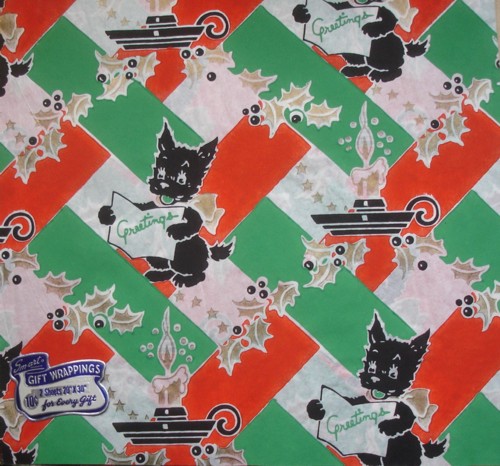 The next two are part of a three roll set that I found in an antique mall: 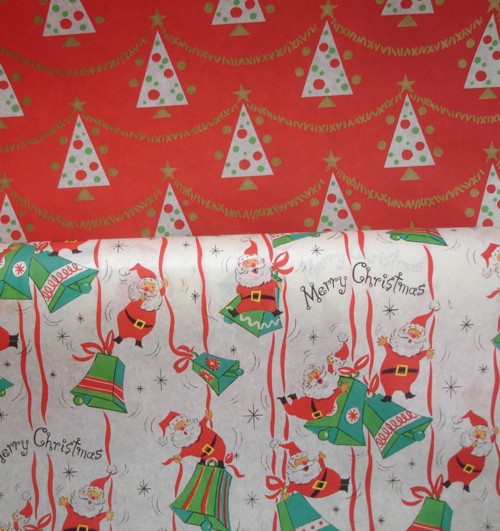