I recently read an interesting quote by The New York Times fashion critic Vanessa Friedman: “Everyone who gets dressed thinks about fashion.”  And while I couldn’t find the quote in context, to me it brings up the idea that being concerned with one’s dress is not for the serious-minded among us.  In other words, fashion is fluff.

The woman in today’s photo may or may nor be a fashionable person, but she is obviously concerned with her style of dress.  Before you go out into the cold weather, throwing on anything that will keep you warm, think about this woman and how she styled herself for the cold.

She limited herself to two colors – pink and black – plus white.  Since her jacket was pink, she chose a black with white snowflake sweater.  Around her neck she tied a black and white scarf.

I suppose the obvious choice for gloves would have been black, but she went with a darker pink with white mittens.

But probably my favorite thing about this snow ensemble is the choice of socks.  How wonderful are those pink socks!

The 1950s are often thought of as a time when everything had to match, but we forget that “matching” can happen in many different ways.  She didn’t do for all pink accessories because the little touch of black at her neck created more contrast and is more interesting visually.

I do have one concern.  For someone who is so stylishly yet appropriately dressed, where the heck is her cap?

Snow has started across the Northern Hemisphere, and it looks like I’ll be getting a taste of it later this week.   To celebrate winter, the Weather Channel has a photo essay of winter sportswear from the past.  There are some great photos, even though a few of them are dated incorrectly.

I’m only posting about it so I can show off the mention of The Vintage Traveler in the article and the link back to my blog.  I’m on the fifth page of the article.  Is this my fifteen seconds of fame?

It was snowing here in North Carolina earlier this morning, but now it is a crisp late fall sunny day.  I hear it is really snowing in New York City though, so this is for all of you getting that first taste of winter.  Ludwig Bemelmans can make anything look charming!

Or reindeer sweater, or Norwegian sweater, which ever you tend to think is correct.  Here in the South the weather has finally decided to moderate, and I do want to express my sympathy to those of you in the Northeast and other snowy places who are still being bombarded by the white stuff.  I know most of you have had enough, so I’m here to the rescue, with one of the best layering pieces ever conceived, the heavy wool sweater.

But not just any sweater, I’m taking about the snowflake sweater, favorite of skiers and snow fans of the 1940s.  And while they became fashionable in the 40s, the designs themselves are quite a bit older, dating back to the 19th century, and originating in Norway.  The snowflake isn’t actually a snowflake at all – it is a star, the Selbu Star.  It is also referred to as the Selbu rose.  This design probably was first put on mittens, and then was put on sweaters.  In traditional knitting, the designs are in two colors, though some commercial knitters (like Dale of Norway) use three. 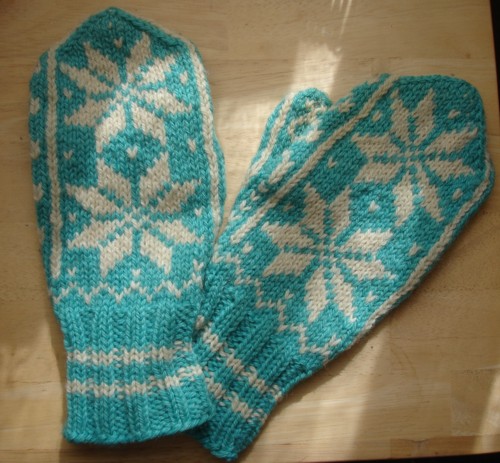 These vintage Norwegian sweaters almost always have a version of the Selbu star, though it can sometimes be quite fancy.  And the most traditional ones have the fanciest part of the design only at the top of the sweater, as these were worn tucked into the pants.

As the designs became more popular, the designs spread across Europe.  By the 1940s some traditional knitters in Scotland were using an adapted Norwegian star.   Commercial firms in the US started making their own versions of the snowflake sweater.  This 1940s one is from California sportswear company Catalina: 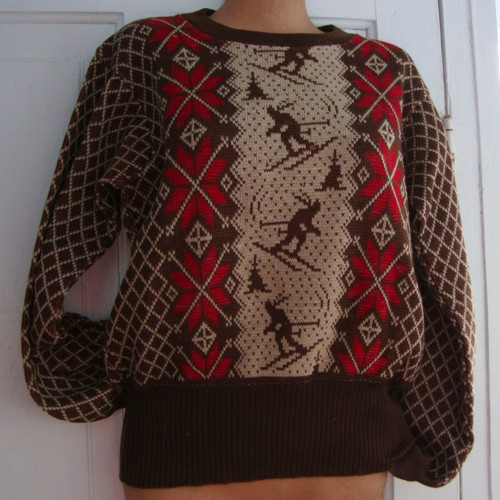 And I hope those of you with a surplus of snow are not reduced to this type of disposal: 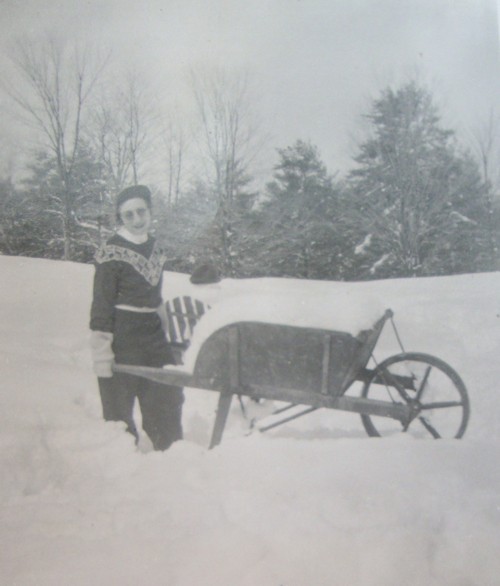 It snowed here in the South today – not much but it was sure fun sitting in our sunroom, sipping coffee and watching the flakes swirl and fall.  The past several years, we’ve not had much snow, but this area is capable of very large snowfalls.  In March of 1993 we had almost three feet!  It started snowing on Friday afternoon and did not stop until early Sunday morning.

But today’s snowfall didn’t even live up to the promised forecast of two to four inches.  It was more like a good dusting.  And for the past five years or so, that’s pretty much been the story of winter around here.

It might surprise some people that even here in the South there are ski slopes.  The first one was opened in 1961 as part of Cataloochee Ranch.  Today, they are two separate businesses, and the slopes are very popular.  Personally, I prefer the coziness of the Ranch… As much fun as skiing looks to be, I’d rather just wear the clothes and find a warm fire and a mug of something hot and steamy.

I bet these gals from the late 30s headed right back inside to the lodge as soon as the photo was snapped!

From my collection of vintage photos.

And aren’t these 1920s girls cute in their berets, sweaters and breeches?

From the cover of Everygirl magazine, 1929

And to show just how far women’s dress had progressed in just 2 decades, here’s a French postcard from the first decade of the 20th century.

From my collection of vintage photos.