Today I wore a skirt I made from Pendleton Black Watch plaid, and that reminded me that I had not talked about a group of brochures I have that advertise Scottish plaids and woolen knits.  McEwens was actually a department store which operated for nearly 150 years before closing in 2016. McEwens had a feature that people today would consider to be a real luxury, but which was fairly common in nicer departments stores in 1961. That feature was a department that made clothing to order.

My brochures are advertising skirts made from wool. There were sixteen skirt styles from which to choose, and sixteen different tartans. A buyer would fill out the order form which asked for the correct measurements. She would then order either a waistband or a petersham waist. She could order pockets for an additional charge. The item was truly made to order.

All the style names start with “glen”. The prices quoted beneath each style was just for the sewing charge. The fabric had to be bought for an additional charge.

If you wanted a truly coordinated ensemble, you could buy your sweater from McEwens using this handy chart that told which sweaters would match. I really love the Black Watch skirt above with that deep green twin set. You probably gathered that because I have it pictured three times.

The custom department at McEwens also made other garments, like these coats and jackets. Note how much more it cost to make a jacket than a skirt.

For home sewers, McEwens sold the fabric by the yard.

This catalog showed some of the made-to-order items along with what might be considered the types of items tourists visiting Scotland were looking to buy. Things like kilt pins, tartan neckties, and tartan scarves.

A shopper could not only choose the style of handbag, but also the tartan used and the color of leather trim. I can’t imagine what this would cost today, but the best that I can figure, these cost approximately $120 in current dollars.

I find so many vintage tartan scarves that I think every visitor to Scotland must buy at least one. It has to be a rule, right?

I think I need a pair of New Caledonian dancing sandals. 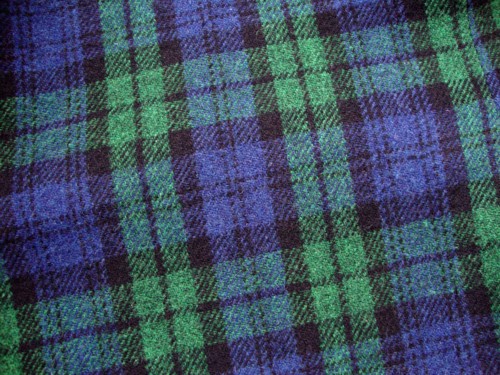 In my simple life, it really does not take much to make me happy, so you might imagine the little suppressed squeal of delight as I ran across a Harris Tweed jacket in the local Goodwill.  And not just any Harris Tweed, but a tartan one, and not just any tartan, but Black Watch.

One of the great things about Harris Tweed is that once you’ve seen and handled a few times, you can pick it out of a crowded rack just from the look and feel of it.  The label is just confirmation of your HT detection skills! 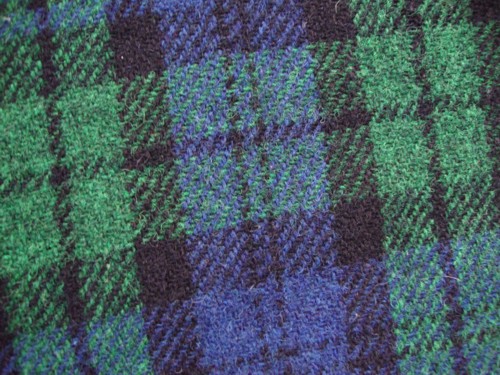 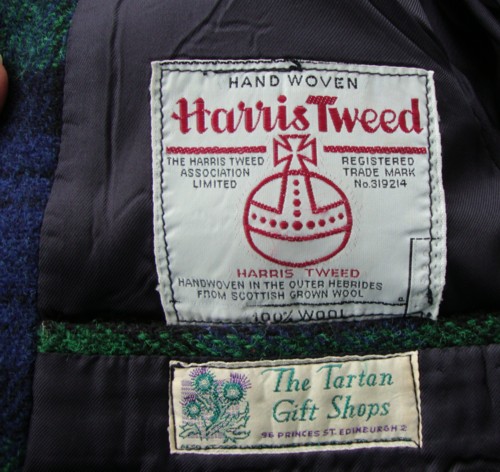 But then there is the bad news.  The jacket is a man’s, and is too big for me.  I’m not much for wearing that style jacket, even if it did fit.  And there are a few small holes one one sleeve, an easy reweave job.

So the plan is to restyle this into a coat for me.  Yes, I know I do preach against the willy-nilly restyling of vintage clothing, but that rule does not apply to a poorly styled but excellently crafted man’s coat from the 1980s.  It’s open season on such garments.  I’ll keep you posted as to the progress of the project, but don’t expect results until after Christmas. 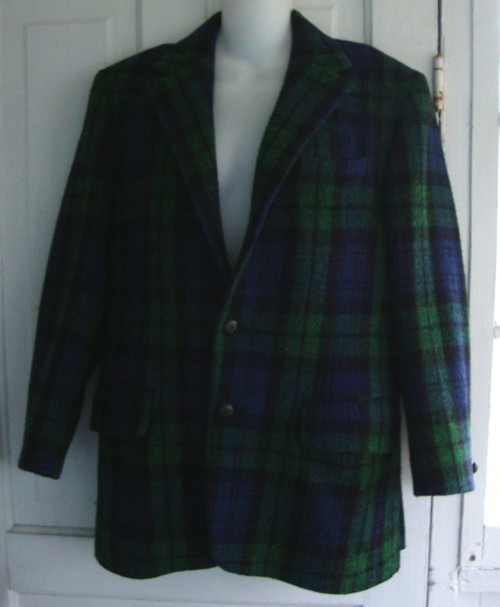 It’s funny how something can be right under your nose, and you have never noticed it until you are talking about something completely different, someone mentions a connection, and it all clicks in.  I’m talking about the appropriation of culture post of last week, and how Karen of Small Earth Vintage mused whether or not there were rules concerning the wearing of Scottish tartans.

It is a very small museum, but packed with information and displays.  There was a lot of information, but the size of the place was so manageable that it was nice to know I could spend as much time as needed at each display in order to absorb it all.   It was time well-spent to a clothing and textile lover like me.

Most of the examples of older textiles are authentic, but there are a few reproductions.  The Falkirk tartan, the first known tartan dates to 325 A.D.  I doubt that any old examples still exist!

The museum’s oldest textile, this piece dates to 1725.  There is proof that tartans were wrapped and belted into a garment by the end of the 1500s.  By the early 1700s, the garment was famous throughout the Highlands.

The mannequin is wearing two garments, a white shirt that reaches to the knees, and his plaide, or blanket, that is folded and belted around the waist, and then draped across the shoulders.  The plaide or tartan wrap was 4 to 6 yards long.  Sometime in the 18th century, a smaller garment emerged, a 4 yard long plaide that was only 25″ wide.  It was folded and belted to just form the skirt, with no shoulder drape.

From there is was just a matter of time until the plaids were permanently stitched into pleats, instead of just being folded.  The kilt, as it was now called, on the right is the oldest known civilian kilt in existence.  It is the MacDuff Kilt, and dates to the 1790s.  Note how there was no attempt to make a pattern with the pleats.  A military kilt would have been pleated to form a stripe pattern, the way modern kilts do.

The kilt on the left and below is the Malcolm Kilt, and dates to around 1800.  It is pleated only on the rear.

The kilt above is the Muirhead Kilt, and dates to c. 1840.  It has an unusual pleating pattern, with one box pleat in the center, with knife pleats fanning out to each side.  The pattern of the tartan was unrecorded before the discovery of this kilt.  In 2000 the pattern was adapted as a new tartan for the Muirhead/Morehead family.

The idea of tartans being associated with clans dates to 1822 when King George IV visited Scotland.   As part of his official welcome, the clan chiefs were encouraged to wear the tartan that was historically worn by members of his family.  Many of them did not even have a standard tartan, and others could not remember what their’s looked like, so at that time many new tartans were just made up.   Most importantly,  the King himself was dressed in red Steward tartan, which then became known as the Royal Stewart.

But it was under Queen Victoria that the tartan plaid became more than just a Highland garment.  She and Prince Albert visited Scotland in 1843, and loved it so much that they bought Balmoral Castle.   Prince Albert adapted the Royal Stewart into a new tartan, the Balmoral, with was worn by workers at the castle.  Like many things associated with the Queen, tartan became a fashion rage in the mid 19th century.  It was also during  her reign that “rules” concerning the wearing of the tartan came into being.  Although tartans are still associated with clans, there are new tartans being designed all the time.  Some towns and states have a tartan.  Despite the associations to clan and geographic area, anyone is free to wear which ever tartan they like.

The staff at the Scottish Tartan Museum is very helpful, and they try to match visitors up with a tartan.  As an Adams, I’m part of the Gordon clan, which is really nice because I love that tartan!  Or I should say tartans, because there are seventeen different versions of the Gordon tartan.