This is not normally the type of thing I pick up to buy, but it’s a Goodwill bins find (aka cheap) so I got it if for no other reason than to get a good look at how the late Victorians made sports a big part of who they were. I’m talking about well-to-do Victorians, of course.

I’d never heard of  Boulton & Paul, LTD. but it was a very old company by the time this catalogue was published, with its roots going back to 1797. And years after 1898 the company got into airplane manufacturing. They were, essentially, a metal works firm, and they made everything from pails to prefab houses in their huge factory in Norwich.

I was most interested in the sporting structures, but they were probably best known as a maker of iron and glass conservatories. My local Victorian mansion, the Biltmore Estate, has two such conservatories, one being built into the center of the house itself.

By 1898 beach bathing huts were losing favor, but you could still buy one from Boulton & Paul. I especially love the little bathing chalet, which I guess was an outdoor changing room for pool-side.

The bicycle craze was still in full force, so a few biking structures had to be included.

Of course, any decent British firm would have cricket and golf pavilions. The roof verandah on the top model is a nice touch.

These pavilions don’t look very portable, but I’ll take the maker’s words for it. A short history of the company that is included in this facsimile catalogue explains that British citizens working in other parts of the Empire often ordered these while in the field for a comforting touch of home.

These tennis players would have been unfashionably dressed in 1898, but as we often see in catalogues, illustrations of stock items are not always updated with each new edition.

For those tired of retrieving tennis balls from the shrubbery, Boulton & Paul offered fencing  for the court.

And for spectators, garden tents were available. Notice the croquet player in the bottom right photo.

The type of leisure that these items represent seem a bit foreign to us today. Most people  can only visit grand old homes with their pavilions and conservatories and imagine what it must be like to be in that elusive one percent, rather like ninety-nine percent of the people in 1898 did.

What I Didn’t Buy – Victorian Jacket

My area of collecting (and knowledge) pretty much starts around 1915, and anything earlier is just a mystery to me.  That doesn’t mean that I don’t take the time to look at and examine the odd piece of antique clothing that might show up in my local antique malls.  You just never know when there might be a Worth label or something insane like that sewn inside.

Well, unfortunately, the label was not Worth, but there was a label, which you don’t always see in antique clothing.  This one reads “Allemus, Philadelphia, Pa.”  I’ve come up empty in a search for this store or maker, although there were quite a few people with the Allemus surname living in Philadelphia in the late 1880s.

But I thought the jacket and its details made it interesting enough to show here.  It was a combination of cotton velvet and a plain weave wool.  The  cording was applied in an intricate pattern.  The inside was lined in an off-white silk that was completely shattered.  In fact, there were bits of silk on the floor below where the jacket was hanging.

In the late 1960s and early 70s when some crazy kids were starting to become interested in wearing old clothes, this would have been a real prize.  Today I can see it as part of a Steampunk ensemble.

There were only two unfortunate holes on one sleeve.

This looks like a very labor (and time) intensive button to me.

This was priced at $10, which I thought was a real bargain.  But I wasn’t tempted.  I’ve learned how to say no to all kinds of lonely old clothes hanging forlornly on wire hangers in antique malls.  It has taken years for me to get to the place where I can actually say that!

Filed under I Didn't Buy..., Shopping 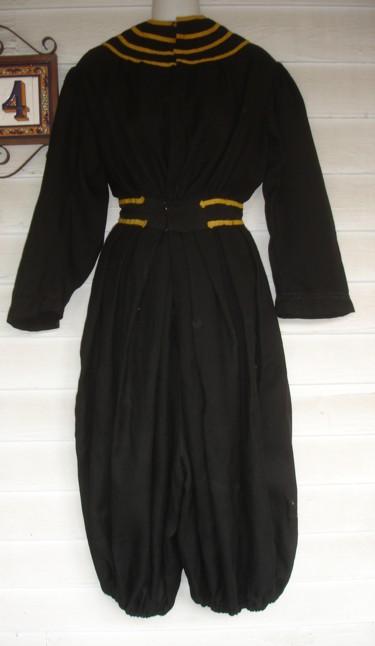 I was recently able to purchase fourteen pieces of vintage sportswear.  The family of a  long-time collector of historical dress was selling her collection due to illness.  They hired a person to inventory the collection, who contacted me.  From the inventory I was able to reserve some pieces I was interested in, which was a good thing because they soon found a buyer for the entire collection, minus the fourteen pieces they promised to sell to me.
Sometimes photos can really be misleading, especially if you think you know what you are seeing.  The person doing the inventory tagged this as a 1900 gymdress, and from the photo she sent to me, I was inclined to agree.  So I was really surprised when it arrived, I put it on the form to photograph it, and realized that the bloomer legs were much longer than the just below the knee length common during Edwardian times.
To test the proportions, I tried the suit on myself (quite scratchy..can’t imaging actually exercising in this!).  It was then that I noticed how dropped the shoulder line is. And the bloomers came almost to my ankles.  I’m short, but the fit and proportions were correct.  After consulting several people who know much more about Victorian clothing than I, the conclusion was reached that this probably dates to around 1865 – 1870.  That makes this a very early exercise dress!
Unfortunately, there would have been a skirt, probably 6 to 8 inches shorter than the bloomers, that the wearer would button over the bloomers.  I’m afraid they were separated long ago.  And the waist was enlarged, with a waistband of different fabric inserted.  The gold braid is original.  Could it be college or class colors, as this was most likely worn by a college girl?   Sometimes I wish these old clothes could talk! 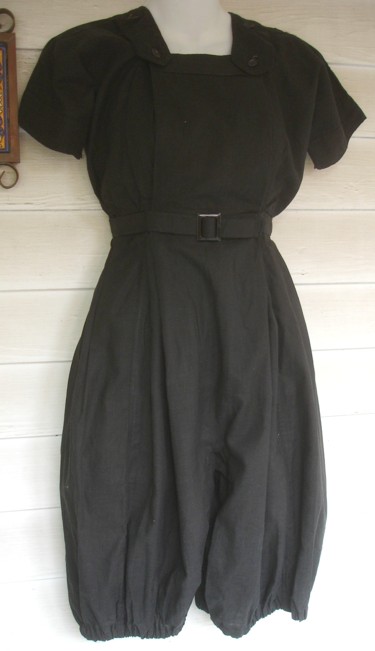 Another of the pieces I bought is this circa 1910 gymsuit.  At first glance it looks a lot like the 1870 one, but many improvements were made in the 40 years between them.  This one is made from cotton, and it is much shorter and less bulky.  The short sleeves and the looser neckline provide so much more comfort to the wearer.  The collector seemed to think this came from U.C Berkeley, but she could not say why she thought that.
The buttons at the neckline come undone, and there are a series of snaps obscured by the belt.  The gymnast would just step in and button up.
This photo was taken in 1912 in Riverside, California.  The woman is probably holding an exercise wand, a weighted stick that the exerciser would wave around to strengthen the arms.

So much fabric! I can’t imagine actually exercising in them but they are fabulous nonetheless 🙂
Saturday, October 30th 2010 @ 5:04 PM

The second one looks too fancy to be used for exercise – such cute details! As always, I love the fashion history that you provide. I learn so much from your posts.
Sunday, October 31st 2010 @ 5:54 AM

Oh my! What fabulous finds! I would think that this 1865-70 exercise dress must be one of the few surviving examples.
I would have loved to see you modeling it! Too bad so scratchy – it would make a fun Halloween outfit.
– Susan
Sunday, October 31st 2010 @ 6:21 AM

That woman with the exercise wand is scary – reminds me of a school nurse I once had who scared the bejesus out of me!
Tuesday, November 2nd 2010 @ 3:29 PM

I’m glad you all found these to be interesting. It is amazing what used to pass as “Comfortable.”Amanda, maybe she was the gym teacher and the wand was used not on the arms, but one the students!
Thursday, November 4th 2010 @ 6:38 AM