Let’s focus on the dress.

And who wouldn’t whisper compliments to the girl in the holly-berry red dress? Heavily textured lace overlays satin for a party dress that’s bare of shoulder  but covered of arm.  By Suzy Perette in Liberty cotton lace over acetate satin.  About $35.  Shoes by Herbert Levine.

Suzy Perette was not an actual person.  It was the name of one of the labels owned by Lombardy Frocks, which was located in the Garment District of New York City.  The owner of Lombardy, Max Blauner, would buy the rights to reproduce dresses from Paris designers.  Dior was a favorite, and you can see Dior’s influence in this lovely dress.

Suzy Perette was considered to be a moderately priced line, and it was marketed toward young career women.  The $35 price tag does seem to be moderate, but in the 2013 dollar, the price is closer to $300.

By looking at the photo, even the original cover, I would never have guessed the dress was lace.  Thank goodness for the “On the cover’ feature.

Could a Christmas look be any more festive?  Here’s proof that one does not have to be wearing a big gaudy red sweater decorated with Santa’s sleigh complete with reindeer, including Rudolph with light-up nose.

No, all it takes is a softly structured coat in a soft dove grey, sparkly earrings, bright red lipstick, and a gloved hand full of carefully chosen and wrapped gifts.

Navy takes a turn at fall, thanks to the addition of a fur collar.  I love navy all year long, even though it is not exactly a “fall” color.  It looks especially great with the red stairs.

The blue suit is by designer Anne Klein.  In 1957 she was a young designer and was working at Junior Sophisticates.  In this issue other young American designers were featured, some of which are familiar names to fashion history lovers:  Donald Brooks, Rudi Gernreich, and Anne Fogarty.  The photographer took all the shots of the young designer feature in his studio, where the spiral stairs were located.

The “Paris Extra” was interesting, because fall 1957 saw the spread of the infamous “Sack Dress”  which had seen its debut in the spring of that year.  You can see the influence in a lot of the clothes in this issue, with a less fitted silhouette and that awkward just-above-the-calf length. 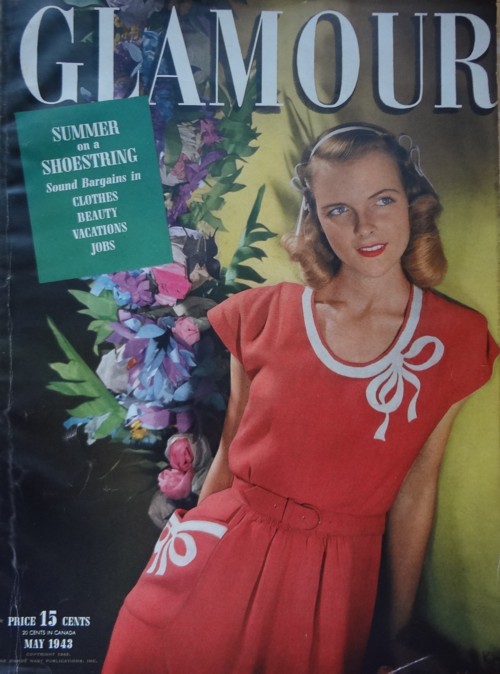 This year’s young bride has a new style – as simple as the wood violets she carries, as fresh as the wood violet cologne she chooses.  Her wedding dress, designed by MLLE, with no train, no veil, and a look of utter innocence, is of imported organdie,  floor length all around, over a rayon taffeta slip.

I chose this cover today partly because of the cap the young bride is wearing.  It is a form of the Juliet cap, which poster Bonnie mentioned she wore to the prom in the 1960s.

As in the 1960s, the 1936 film version of Romeo and Juliet triggered a fashion for the Juliet cap, or calot.  Juliet was portrayed by Norma Shearer, who did justice to the little cap.   It was considered to be a romantic hat for weddings or evening wear, and was often made of lace or mesh.  I know so little about hats that I always turn to Susan Langley and her excellent Vintage Hats & Bonnets 1770-1970, and so thanks to her for the nice information about the Juliet cap.

It’s that time of year when spring is still trying to decide if it wants to come out and play, and people look at their closets and scratch their heads.  If you are like me, you are desperately wanting to lighten up the wardrobe, but I’m afraid that if I get too optimistic then winter will return and I’ll be caught out in the cold unprepared.

It’s an old problem, and I imagine that in 1952 it was even harder to cope with a changing season as most people did not have the extensive wardrobes that we do today.  The model above has put away the heavy woolens, and has opted for a “three season” suit – one made of lightweight wool or heavy cotton in a neutral color.  Just add season appropriate accessories and the look is complete.  (20 inch waist, optional)

It seems like everywhere one turns these days there is an article or reference to the 1920s.  I’m sure the up-coming Gatsby film from Baz Luhrmann has a lot to do with the interest.  You would almost think this was a Twilight movie with all the buzz that is surrounding it and with the release date less than a month away, the interest is growing.  A new trailer was released last week, and with it the lines have been drawn between those who are determined to love it, and those who have vowed to hate it.

I think to key to loving it is to just forget everything you know about fashion in the 1920s, and just enjoy the spectacle that is a Luhrmann film.  Go into the theater knowing this is fantasy, not American Lit and certainly not fashion history.

This is the fifth time The Great Gatsby has been filmed.  I have not seen the 1926 version (considered to be a lost film) nor have I seen a 2000 made for TV version, but the 1949 and the 1974 films neither accurately captured the fashions of 1922, when the book was set.  The clothes in the 1949 film pretty much look like they are from 1949, and the 1974 clothes look like they are from later in the 1920s when skirts had risen almost to the knee.

Of course the problem is that people seeing the film who are not that familiar with the fashions of the early 1920s will now have a visual reference, however misleading,  much like the 1974 version crystallized a vision of the 1920s for my generation.