I recently added another gymsuit to my little collection of them.  My best guess is that this one is from the late 1930s, or maybe into the early years of the 40s.  In fact I have a 1940 catalog from maker Aldrich & Aldrich that shows a suit that has a lot of the same features. 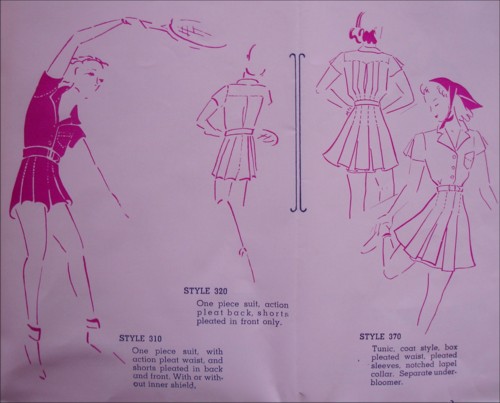 Gymsuits are not fashion items, but to some extent they did follow fashion, or at least sports clothes fashion.   In the case of my gymsuit, the pleated sleeves were very popular in the mid 1930s.   Maybe some gymsuit maker noted the fashion and realized that this sleeve was a good one for use in a garment that needed to let the wearer move.

Other features that increased mobility were the pleated skirt and the presence of an inverted pleat in the back.

To make it easier to get dressed in the small amount of time that a school schedule allowed, there were snaps instead of buttons, and a metal belt clasp that did not require buckling.

I’m always amazed at how well vintage gymsuits are constructed.  The fabric is usually a cotton; either a broadcloth, poplin or a lightweight duck.   They were made to last through four years of physical education.

There were quite a few gymsuit makers, but Brownie is a new one to me.  It is interesting that the label was based in St. Louis, home to the fashion industry for the teen set.

A brownie is a sort of elf-like creature, similar to Dobby in the Harry Potter series, but cuter.  They were popularized in the late 19th century by illustrator and writer, Palmer Cox.   The Brownie branch of the Girl Scouts was named for them.