I suppose I should have posted this lovely cover last month, but to be honest I’m not sure where August went.  It certainly was a fast-moving month.  And even though this is a beautiful summer frock, why can’t one wear it in September?

The truth is, I no longer care about the idea of changing clothes with the changing seasons.   I’ve known for a long time that I was moving toward a year-round wardrobe, but when I went to pull out a light sweater from my off-season storage, I opened the trunk to find it practically empty except for one Pendleton plaid shirt bought on clearance at the outlet this spring and woolen gloves, hats and scarves.  All my sweaters were already in my closet.

It helps that I wear the same colors – blue, white, black, red – pretty much all the year.  For winter I add plaid and cashmere.  For summer it is shorts and sandals.  Of course it helps that I lead a very casual lifestyle where work clothes are not required.

And even though it is after Labor Day, my white jeans are still in my closet, and will remain there indefinitely.

It seems like everywhere one turns these days there is an article or reference to the 1920s.  I’m sure the up-coming Gatsby film from Baz Luhrmann has a lot to do with the interest.  You would almost think this was a Twilight movie with all the buzz that is surrounding it and with the release date less than a month away, the interest is growing.  A new trailer was released last week, and with it the lines have been drawn between those who are determined to love it, and those who have vowed to hate it.

I think to key to loving it is to just forget everything you know about fashion in the 1920s, and just enjoy the spectacle that is a Luhrmann film.  Go into the theater knowing this is fantasy, not American Lit and certainly not fashion history.

This is the fifth time The Great Gatsby has been filmed.  I have not seen the 1926 version (considered to be a lost film) nor have I seen a 2000 made for TV version, but the 1949 and the 1974 films neither accurately captured the fashions of 1922, when the book was set.  The clothes in the 1949 film pretty much look like they are from 1949, and the 1974 clothes look like they are from later in the 1920s when skirts had risen almost to the knee.

Of course the problem is that people seeing the film who are not that familiar with the fashions of the early 1920s will now have a visual reference, however misleading,  much like the 1974 version crystallized a vision of the 1920s for my generation.

In the last cover I showed that was done by Browne, I commented on how well she conveyed the feel of the fabric.  I’d be interested to hear what the coat fabric looks like to you. 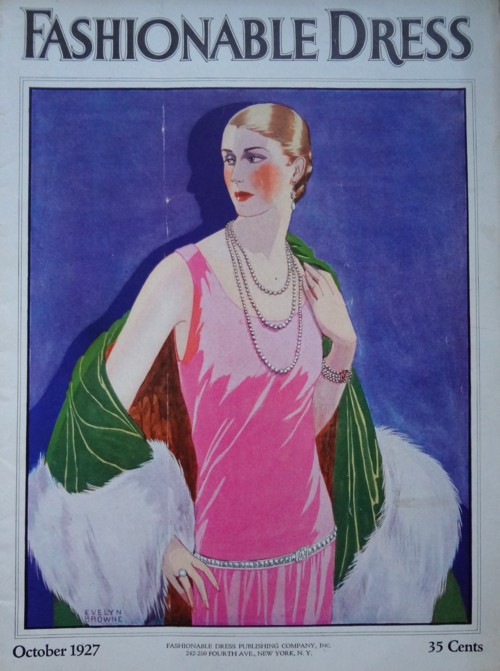 October seems a bit early to be thinking about party dresses, as I seem to always associate them with the holidays.   Since this is a pattern catalog, maybe they were trying to get the sewers in the mood a bit early so they would have time to order their pattern and sew the frock before New Years Eve.

Not that I’m living much of a party dress life, however I do have another family wedding coming up next weekend.   This is not the occasion for a pink dress with a green wrap trimmed with white fur, however.  I’ll be wearing a little black dress, topped with a vintage cashmere sweater trimmed with gold braid, and I’ll be wearing vintage shoes.  I’ll try to post photos after the event.