I can imagine that to the average Charm reader, a trip to somewhere in which a swimsuit would be needed in January was just a dream.  It was, after all, The Magazine for Women Who Work, and not for the women who had large sums of money with which to take winter vacations. Or maybe this was meant to be for the “later” mentioned in the caption.

I’m really interested in the idea of swimsuits with sleeves.  Ever since the sleeves were banished from bathing suits in the early 1920s, makers have tried on numerous occasions to bring them back, and in fact, many of Claire McCardell’s designs for swimsuits had sleeves.  Nevertheless, it is very rare for one to come onto the vintage market, so I’m betting they just didn’t go over, especially in the days when much of the object of wearing one was to get a tan.

Today  everything from two pieces of string tied strategically to a long sleeved leotard paired with leggings can pass for a bathing suit.  I rather like the idea of a short sleeved bathing suit, but then I’m pretty much in favor of all sleeves these days.

Charm, as the subtitle tells us, was a magazine geared toward the young career woman.  In 1951 a career woman was often an office worker or a nurse or a teacher.  Personally, I’d like to see this woman in a classroom.

Teacher fashion gets a very bad rap, often with good reason.  I’ve witnessed too many teachers wearing ill-fitting dowdy denim jumpers and baggy elastic waist knit pants.  And come October, schools are filled with adults wearing heavy orange sweaters liberally decorated with scarecrows, pumpkins, and if the community allows, ghosts and witches.  But that’s only the beginning, as there are sweaters for Thanksgiving and Christmas and Valentine’s Day and so on.

Teachers will tell you that the reason they dress like that is because the job necessitates that they be comfortable and look cheerful.  While that is true, it does not mean that sloppiness is requisite.  Whether or not they like it, teachers are strong sartorial role models.  Children notice what the teacher wears and they get a sense of how a professional  is supposed to dress from the woman or man standing in front of them every day.

It may sound as if I’m being over harsh in my assessment of how many teachers dress.  It’s only fair to point out that for every teacher who looks like a refugee from the Quacker Factory, there is another who dresses simply but professionally, like our cover girl.  A trim and neat sweater topping a pleated skirt or a pair of well fitting slacks with a scarf at the neck (brooch optional) makes a good school uniform for the teacher, and sets a high standard for the children to aim for in the future.

Of course, when I retired there were five black pleated shirts in my closet.

Could a Christmas look be any more festive?  Here’s proof that one does not have to be wearing a big gaudy red sweater decorated with Santa’s sleigh complete with reindeer, including Rudolph with light-up nose.

No, all it takes is a softly structured coat in a soft dove grey, sparkly earrings, bright red lipstick, and a gloved hand full of carefully chosen and wrapped gifts.

Why I Love the Internet

I posted this great cover last month, as some of you will remember.  Earlier this week I got an email from a nice woman in California who had been looking for this particular issue of Charm.  As it happens, her mother worked for the magazine in the early 1950s, and in some correspondence she mentioned this particular issue.  She was an editorial assistant, and she helped write the articles that appeared.   In particular she mentioned ghost-writing a “beauty bath article by Kay Torrey.”

Well, I got the magazine and quickly found the article in question:

The assistant’s name was Lois Isde.  According to her daughter:

“After graduating from Valparaiso University (Indiana) in the early 1950s (with a degree in geography), my mother moved to NYC to pursue a career in publishing. She had brief stints at Charm magazine and Women’s Wear Daily, before meeting my father who was a graduate student at Columbia University. They eventually moved to Madison, Wis., and then Chicago and she stopped working to raise my 2 brothers and me. After we were grown, she worked for a medical publishing company in St. Louis. She always loved those years in the 1950s when she wrote about  fashion, beauty, women’s issues, etc, in New York City.”

Rarely am I persuaded to sell things that I post about here, but this was just too special not to pass along to Lois’s daughter.  The internet has been with us for quite a few years now, and sometimes we take it for granted.  But when I’m able to connect with a reader in this way, I remember just how great the power of google is.

It’s that time of year when spring is still trying to decide if it wants to come out and play, and people look at their closets and scratch their heads.  If you are like me, you are desperately wanting to lighten up the wardrobe, but I’m afraid that if I get too optimistic then winter will return and I’ll be caught out in the cold unprepared.

It’s an old problem, and I imagine that in 1952 it was even harder to cope with a changing season as most people did not have the extensive wardrobes that we do today.  The model above has put away the heavy woolens, and has opted for a “three season” suit – one made of lightweight wool or heavy cotton in a neutral color.  Just add season appropriate accessories and the look is complete.  (20 inch waist, optional)

Miracles for you – Your Job – Your Fashions – Your Home

Love the touches of red?  So must have the editor at Charm, as in three January issues, 1951, 1952 and 1954, the model is wearing or holding a bunch of red flowers.  Intentional?  Who knows.  Effective?  Definitely!

I’m just home from my trip to the Land of Black, otherwise known as New York City.  Not that I don’t like black; I do.  But it was always refreshing to see someone on the street who knows, like the stylist for this photo knew, that a bit of color makes one stand out in a sea of black and grey.

New York always amazes me.  I don’t visit very often, and there is enough time between visits for me to forget just how big the place is.  I’d like to remind those of you who live there or within a short train ride how lucky you are to have such amazing resources so close at hand.  I hope you are taking advantage of them because the rest of us muddle about looking for the types of opportunities that you encounter every day.

One such opportunity I missed due to lack of time was the Fortuny exhibition at the Queen Sofia Spanish Institute.  I was happy to see that Monica Murgia took this exhibit in last week, and she wrote an excellent review of it.  Of course, seeing her photos of it made me even sadder that I had not tried harder to fit it in.

But I’ll not dwell on the past, but instead I’ll be bombarding you with what I did observe and encounter.

And just to prove that I practice what I preach, here is a photo of me with my friends Linda and Carole.  I hate that you can’t see Linda’s red shoes! (No, we did not plan it that way, and I only noticed all the grey with touches of red after going back through my photos.) 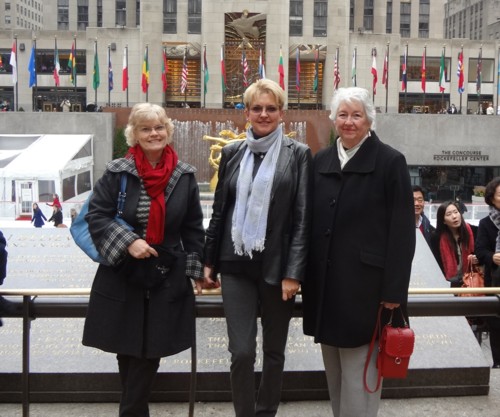